I’ve spent a lot of time with my dragonfly swarm data lately because reports have poured in all week.  The best part is looking through the stories that people have shared about their experiences with swarms.  Thought I’d share some of my recent favorites with you today!  Because they’re fairly short, I’m going to give you a few stories in each of 5 different categories, exactly as submitted to me. Bonus material! And just so you know, the photos today are from people who have sent me swarm photos, so they’re used with permission of the photographers indicated.

“Each of the two captured insects, when released, left the swarm and ascended directly away until they were no longer visible.”

“The timeline was interesting. When first observed (just at sunset or slightly after), the swarm (about 12-15 individuals) appeared to be all Aeshna umbrosa. I captured 4 specimens (2 of each gender) and every one I observed at relatively close range (obviously the light was low) matched the pattern of A. umbrosa. Swarm appeared to be an even mix of male and female, but it seemed like the females were the ones flying low while the males were a bit higher on average.  After about 15 minutes, I started seeing Anax junius and the A. umbrosa abruptly disappeared. For about 10 minutes the A. junius continued to swarm in somewhat lower numbers (8-10). I caught 3 for confirmation (1 female). At this point they disappeared about as abruptly as the A. umbrosa. I saw 1 or 2 scattered individuals as I walked back to my car, but couldn’t see them well enough for identification.”

Stories of people who are scared of the swarms are rarer than I would have expected.  Honestly, I can’t blame people for being scared if they don’t understand what they’re seeing or know enough about dragonflies to know they’re harmless.  Some recent examples of people who have been scared of their swarms include these:

“I have lived in this small town my whole life and its a rare site to see dragonflies. then today I went out on my back porch and seen them flying in groups, HUNDREDS OF THEM! I was kinda freaked out to be honest lol.” 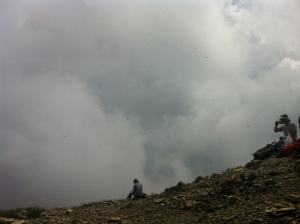 Photo by James Ashworth – Click to enlarge! This one is AMAZING!

“This was a total surprise. We’ve never seen anything like it.  It was mesmerizing and delightful, particularly since they were going their merry way and totally ignoring us. They never stopped moving, and made no sound whatever that I could hear.  They must have great radar because not one bumped into us or our chairs or umbrellas.”

“My 20 year old daughter and I have always loved dragonflies. When she was little she used to call them faeries. When I walked out and saw the swarm in my yard I had to call her out to see. We sat and watched them for an hour or so…she even went and stood in the middle of them while they fly in circles around her.”

Many people get take their swarms as signs of something, good or bad.  Some people are comforted by the dragonflies, derive spiritual fulfillment from them, or see them of omens of some sort.  Many of these will bring a tear to your eye.  Some recent ones include:

“My comment to my aunt who I called to come see it was. I think God just sent a plague of dragon flies!”

“Leaving to get back to home & work on Monday, this was a real treat and a true ‘sign’. Reading Penny Pierce’s ‘Intuitive Way’ I was curios to know more about dragonfly symbolism (just realized I had my dragonfly earrings on yesterday that a friend from Sedona gave me ;-).”

Category 5: Getting the Kids Involved

I think these are the stories that give me the biggest warm fuzzies, the ones that describe how kids responded to and/or loved the dragonflies they saw.  Some examples:

“It was my anniversary … I went to take out the trash …. They were everywhere in my face I stopped and called for my kids & husband to look! It was amazing, mesmerizing , I have never seen anything like that! I felt lucky and like there was something special about this! We just stood in the middle of it and we stayed until they were gone! I’m sure we will all remember that day forever! It was spectacular!”

“We looked out our kitchen window and saw a number of dragonflies hovering about. I immediately ran outside, along with all my family, and we stood for several minutes in amazement watching the creatures fly, hover, zip, and zoom overhead. We kept commenting on what they might be doing and why, thinking it all very interesting.”

“This is the first time I observed a swarm like this. My children who are 14 and 10 thought it was the coolest thing.”

“Very neat! Kids from next door came over to say ‘Come out and see this!'”

Dragonfly from a swarm! Photo by Julie Olds.

And finally, just because it made me laugh, I present this perfectly short and sweet little response:

Thanks to everyone who has submitted stories and/or photos to the project so far!  You all are awesome, and regardless of how you respond to your swarms, I absolutely love reading your stories and appreciate your sharing them.  It makes my research project so fun!