Swarm Sunday is here!  A little late, but hey – I worked on Sunday and have been swamped with work since, so it just hasn’t happened yet.  Regardless, last week was a great swarm week with dragonfly swarms reported from the following locations:

And here’s the map: 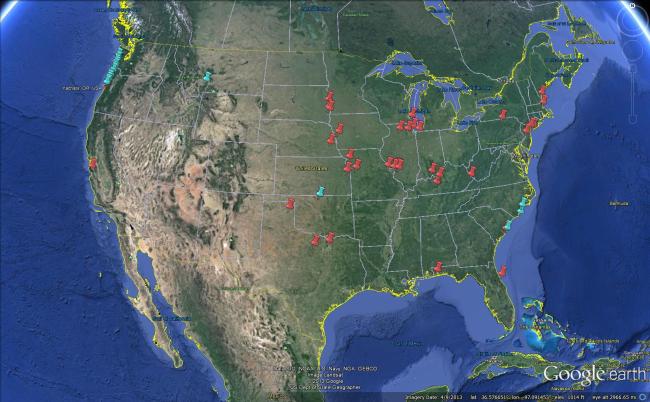 Some really cool things happened this week!  First, I’d like to draw your attention to that massive line of blue pins on the northwestern coast.  That represents a huge western migration of Sympetrum corruptum, the variegated meadowhawk.  That species migrates every year in that area, but some years it is more noticeable to non-entomologists/odonate enthusiasts than others.  This year was a really noticeable year!  Look up at the list of reports from Oregon and Washington and you’ll see that there were a lot of reports, and most of those came in over a two-day period.  It was a really impressive migration!  I’m sorry I didn’t have a chance to see it in person.

The second thing you’ll notice is that though there are few migratory movements represented in the midwestern US, most of the static swarms were located along the major midwestern rivers.  That’s a good indication that the midwestern migratory species are on the move too.  Those swarms are often made up mostly of green darners (Anax junius), but several people reported black dragonflies in their swarms.  That suggests that the black saddlebags (Tramea lacerata) might be moving too.  The migration appears to have begun!  And after last year’s migratory non-event, it’s already shaping up to be a more impressive migration.

There was a smaller event in my area of the country, with a few migratory swarms reported in North and South Carolina.  I had intended to rush out to the coast to see the migration as soon as there was good evidence that the migration was happening, but there wasn’t a big swell in reports as I’d expect for a major migratory movement and I decided not to go.  I’d expect something more like what I saw from the northwest if there were enough dragonflies to warrant the drive to the coast.  I’m hoping we’ll get more dragonflies moving in over the next few weeks, especially as there hasn’t been a lot of movement of the dragonflies in the northeast yet.  I might still have an opportunity to observe the migration!

So, an exciting week of dragonfly activity!  One of the people who saw the western migration in Oregon got a video of the swarm, so I want to finish up this post with that video.  It’s shaky, but it gives you a really good idea of what the flow of dragonflies looked like.   There were reports of up to 500 dragonflies per minute flying along the Oregon coast, so this was a darned impressive event:

Keep sending in data!  This is the best time of year to have a chance to see a swarm, a time of great dragonfly activity all over the country.  If you see a swarm, I hope you’ll report it!

Have you seen a dragonfly swarm? I am tracking swarms so I can learn more about this interesting behavior.  If you see one, I’d love to hear from you!  Please visit my Report a Dragonfly Swarm page to fill out the official report form.  It only takes a few minutes! Thanks!