There are still some swarm reports coming in, but things were pretty slow again this week.  Swarms were reported from these locations:

And here’s the map: 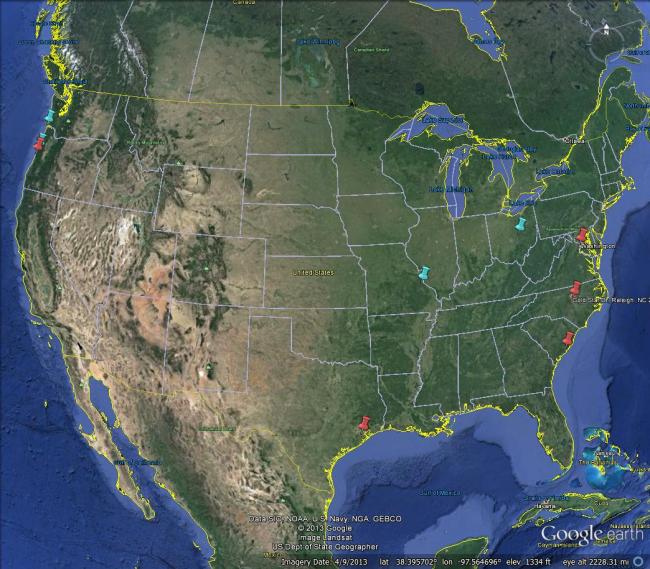 This week was a little surprising to me, for two reasons.  First, there were more reports than I expected, and nearly all of them came from northern regions of the country.  I didn’t expect to get any swarm reports from the northern US for the rest of the year.  Second, there was a second migration on the west coast with thousands more dragonflies flying down the Oregon coast over the last few days.  That seems odd, especially considering the migratory movement down the coat in August was so huge.  I didn’t think there would even be that many dragonflies left!  But there were multiple reports, so it was a big enough event for people to notice.

On the home front, we had a few cool days last week and the dragonflies all but disappeared.  I thought they were gone for the year, that we’d just see a few more here and there.  Then, it warmed back up and a few days later I saw my first swarm of the year!  There were massive numbers of little flies and other flying insects darting around over the grass as the sun began sinking toward the horizon and the dragonflies were eagerly taking advantage of the bounty.  It wasn’t a very big swarm, just a dozen individuals, but I was still excited as I haven’t seen a swarm all year in spite of going out to look for them every time I felt the conditions were right.  There was also a big bunch of chimney swifts flying up above the dragonflies.  I never saw a swift go after a dragonfly, so I can only presume that they were eating the same insects as the dragonflies.  This behavior is reported for swifts and swallows all the time, so it’s nice to see it in person from time to time.

The season is likely really over in the areas of the country that had blizzards last week, but apparently there are still a lot of dragonflies out and about in other areas.  Report any swarms you see!  This season has proven to be very strange, but really interesting, so I’m eager to get as many late season swarm reports as I can!

Have you seen a dragonfly swarm? I am tracking swarms so I can learn more about this interesting behavior.  If you see one, I’d love to hear from you!  Please visit my Report a Dragonfly Swarm page to fill out the official report form.  It only takes a few minutes! Thanks!