Well, it’s starting to get cold in Raleigh.  Earlier this week, I was the last person in the office when I heard what sounded like freezing rain hitting the window.  As I looked out the window, a few snowflakes started to fall.  I had planned to stay and finish something I was working on, but I know how people in Raleigh get when there’s even a hint of snow (i.e., they freak), so I dashed out to my car to try to beat the traffic the “snow” would cause.  No such luck!  My 20 minute drive home took well over an hour, just because it was dark and everyone was panicking about the “snow.”  But I digress!  Apart from the tiny flurry of snow, the cooler weather also means that the area’s insect population has started to dwindle.  I’ve started to see ladybugs moving into the office again (a sure sign of winter!) and fewer and fewer insects can be seen outside.  But, I still have a good store of insect shots I haven’t shared with you all yet!  Here are a few of my recent insect photos: 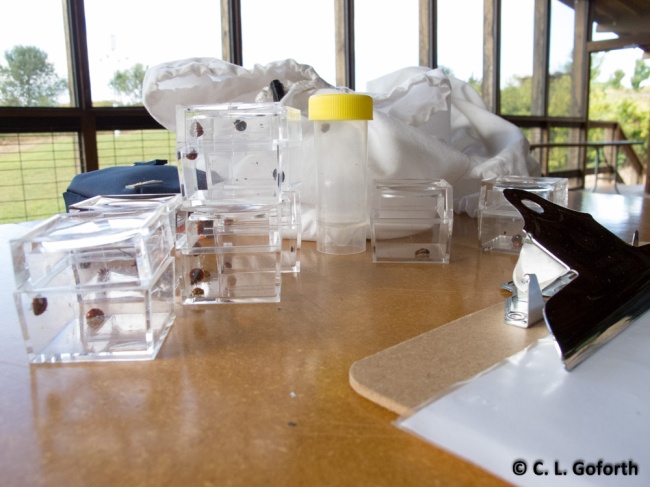 I mentioned last week that we recently opened a play area at the field station where I work as a way to draw in more families with young children and connect the young’uns to nature.  The grand opening was a major affair.  As part of the event, I led a ladybug hunt and took about 25 kids, plus their parents, out into the prairie to collect ladybugs.  They came back with about 70 ladybugs after just 10 minutes of searching!  We were collecting data for the Lost Ladybug Project, so after the hunt I photographed the ladybugs we found.  It took ages!  The ladybugs run all over the place, so you have to chase them around with the camera, panning as they run, and snap a half-dozen photos of every ladybug, hoping that at least one shot is clear enough to see the spot pattern.  It’s a grand photographic adventure!  Much easier to take a shot of half of the ladybugs still in their boxes.  :) 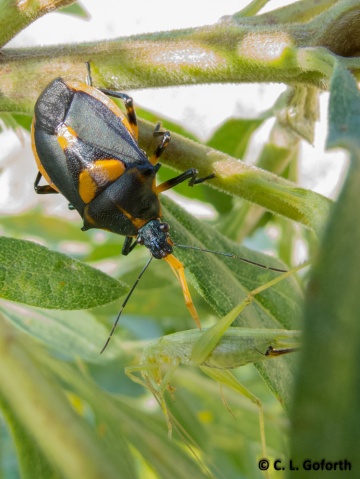 I’ve always wanted to see one of these stink bugs!  I had someone call me over to ask a question one day at work and I happened to catch this bug’s movement out of the corner of my eye as I walked past.  Happily, I had been out to photograph something else and had my camera in hand, so I just climbed right into the bush and snapped a bunch of shots after I answered the question.  What a gorgeous  bug!  I can’t resist a good predatory bug.  Look how the cricket is impaled on the flaming orange mouthparts!  Gruesome, but kinda awesome too.

One of my coworkers is the official educator for the field station where we work and occasionally catches caterpillars to show the kids she teaches.  This black swallowtail caterpillar was only in the cage one day, but it was ready to pupate.  I took this shot right when it had started to form the silk pad that would anchor it to the wall.  It’s hard to move them once they’ve started pupating, so I suspect it will remain in the box until spring.  Maybe I’ll be able to get a few shots of it emerging too! 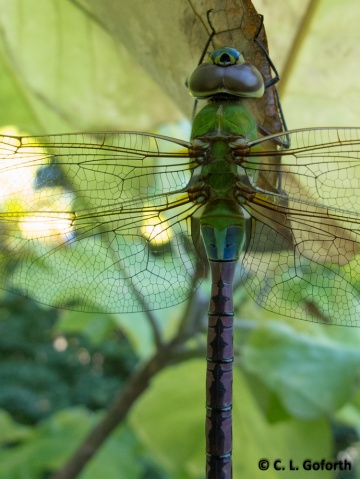 I was walking down a trail when this dragonfly swooped right in front of my face and landed on a tree just a few feet away to roost for the night.  What luck!  I took advantage of the cool weather to get in close with my point and shoot and snap a few shots.  I was able to get within inches of this dragonfly and probably took 50 shots without it moving a bit.  So exciting!

I went on a work trip to the Smokies a few weeks ago, and one of my favorite parts was a lichen citizen science activity we did with a couple of the education rangers at Great Smokies National Park.  I really love lichens, so I was thrilled to have an excuse to take a really close look at lichens on a tree.  However, the best part of the activity for me was not the lichens themselves, much to my surprise. Instead, the lichen activity had caused people to take a good, close look at the trees, which meant that suddenly they were seeing all sorts of tiny things they never would have noticed otherwise.   I was called over shortly before we discussed our lichen monitoring results because one of the other groups had found a really cool spider lurking in their lichens and wondered if I knew what it was. I didn’t, but we snapped some photos and oohed and awwed over the it until another group called me over to look an insect they’d found, a caterpillar that had been severely parasitized.  Snapped a few photos of that and was about to walk back to my group when someone found the chrysalis in the photo.  Suddenly everyone started seeing insects!  We found a rainbow-colored stink bug nymph, some more chrysalids, cool flies, more spiders.  It was awesome!  The trip leaders had to sort of drag everyone away after we were done or we probably would have spent the next hour looking at cool, tiny things on trees.

So those are a few of my recent insects, but I suspect their numbers will dwindle even to almost nothing in the next few weeks.  Sigh…  Anyone else out there still getting to see insects?  Would love to live vicariously through your insect encounters, so tell me about them!