Warning: this is going to be about the least scientific post I’ve ever written.  I am about to commit behavioral entomological blasphemy and attribute human traits to insects.  Just wanted to give you a head’s up so you know what you’re getting yourself into if you choose to read this post.  :)

Have you ever taken a good, close look at a dragonfly’s head?  Ever notice how they almost always look like they’re smiling?  I know I’m going to ruin dragonflies forever for you all by posting this, but I took a photo of a nymph yesterday and was struck by how happy it looked.  It got me thinking of the other photos I’ve taken of dragonflies and after looking back through my collection, I’ve noticed a trend.  Today I give you five photographs of dragonflies that look like they have huge grins on their faces, just because I felt the need to share this revelation of smiling dragonflies with the world. 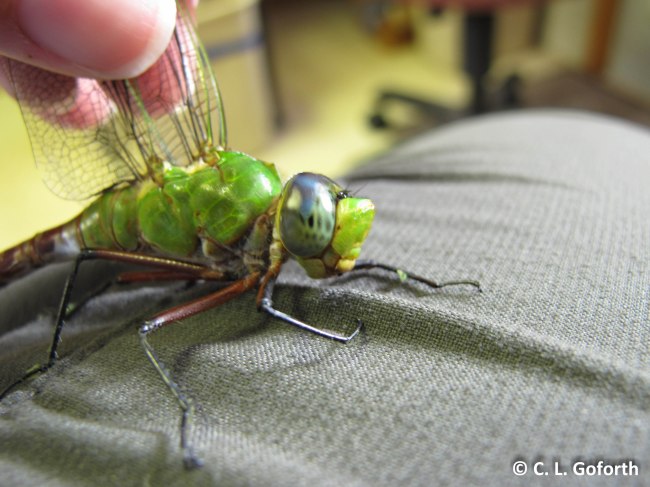 This gorgeous gal was captured in a mist net by the ornithology group at the Museum a while back.  They trap birds with the nets at Prairie Ridge every other week or so to band and track the birds on the grounds.  Someone found this beauty in the net and brought her for me to see.  Look at that big smiley face!  She might be a cold-blooded killer (pun intended!), but she looks so pleased with herself.  She almost looks like she’s grinning at you.  Or maybe she knows something you don’t know.  Perhaps that she’s going to try to bite you on the leg in a moment…  (Happily, she got my pants instead!)

This is one of my all time favorite dragonfly photos I’ve taken.  But look at his face!  There’s that big ol’ dragonfly grin.  But that grin doesn’t even come close to this one: 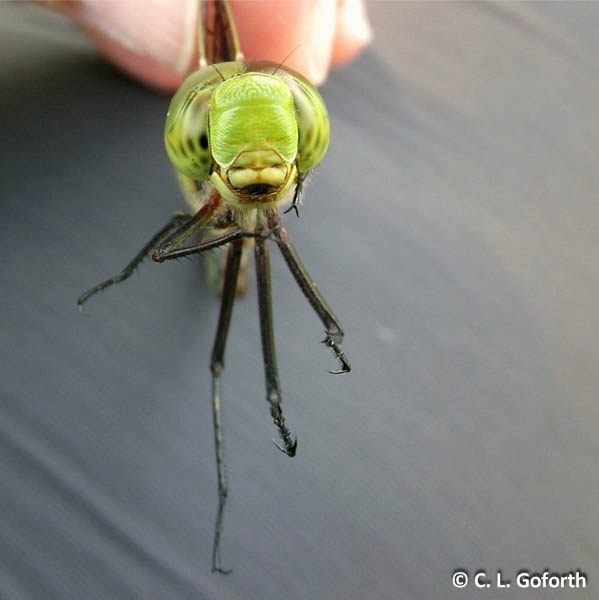 When you look at dragonflies head on, they definitely look like they’re smiling! Does this darner not look absolutely thrilled that I’m holding him?  It’s like he was asking for me to capture him in a net and take photos of him.  Like his comet darner relative, there’s always a chance he was smiling because he was daydreaming about the day he could take revenge against me for interrupting his day of eating and looking for girls to hook up with.  Those activities are important to these guys, and I had to go and ruin his day by insisting he pose for photos…

The smiles aren’t just a trait of the adults either!  Check out this nymph: 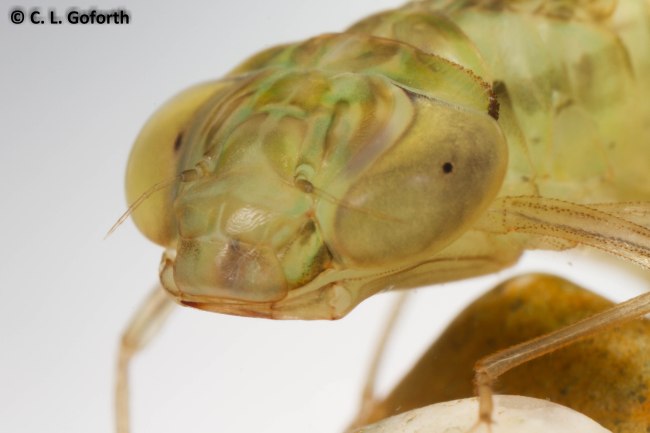 This nymph is giving you a more bashful, sideways sort of grin, glancing at you out of the corner of its eye.  Hard to believe that an insect with that sort of adorable face could be a mass murderer of insects, but then it’s never the ones you expect… 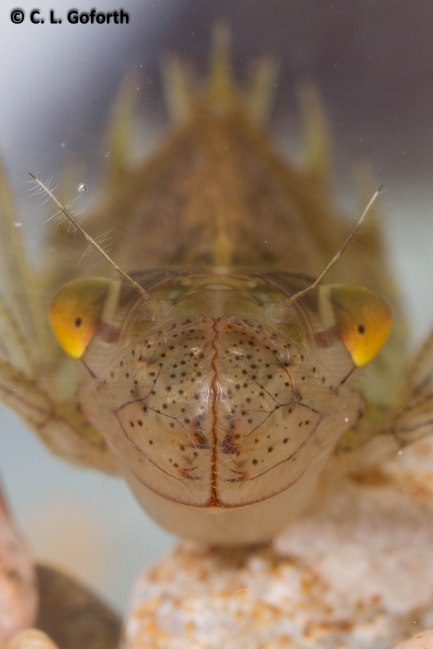 This one looks happier than a kid on pixie sticks! Just look at that smile.  He (or she) is positively grinning from ear to ear!  Nevermind that that grin is made up of the grabby parts of the dragonfly mouthparts or that you can see the sharp, chewy bits underneath.  This smile probably strikes fear into the hearts of many insects, small fish, and tadpole – and might be the last thing many of them will ever see!

So there you have it, folks.  Smiling dragonflies.  Who knew?  I think this might be part of the reason people are under the impression that dragonflies are “cute” or “girly” insects, why I see them so often on jewelry and silk scarves and purses.  They look all cute and happy!  But these insects are fierce predators. They will happily eat other dragonflies and damselflies if given the chance, along with anything else they can catch and hold onto long enough to eat.  A dragonfly was once recorded taking down a hummingbird – a BIRD!  They’re vicious, voracious little hunters, not the little flimsy, fairy-like things so many people seem to think they are.  And maybe that’s why they’re smiling.  They know they’re completely bad a** – and they don’t care who knows it!