I had a relative in town last week, so I never had a chance to get a blog post up.  This week you get two weeks in one!  But before I get to that…

You might have noticed that I changed things up a bit around here.  May 28th was my 5 year blogoversary (FIVE YEARS!!!  Crazy!), so I decided it was time to make some changes to the ol’ blog.  This is only my second overhaul since I started, and Wordpress FINALLY gave me another template option that I liked.  As I was changing the look anyway, I decided to move some things around too.  My copyright info seemed clunky, so I shortened the text on the homepage and have a page with more information about what I allow.  I couldn’t get my links to display the way I wanted them, so I’ve now got a page just for my links.  The info about scientific names is now found under the educational materials tab – just hover over the tab text and the old menu options will drop down.  The photos can be bigger in this theme, so you’ll get larger pictures starting today.  And, I’ve decided I no longer care that just one post shows up on the homepage.  Now you can scroll down through post after post all the way to the very first one, 610 posts ago!  Anyway, I’m liking the new look and new organizational scheme, so I hope you do too.

And now on to Friday 5!  These were some great insect-related moments I had over the past two weeks.  Last time I did this, I tossed a non-insect nature sighting in at the end, and I think I’m going to keep doing that, but we’ll start with the bugs:

I know I’ve mentioned them before, but I have this awesome group of teens from a local high school that have been working with me all year on a citizen science project that they designed and are carrying out in the stream at Prairie Ridge.  They’ve come out every three weeks the entire year to sample insects and we finished up the school year with lunch at the Museum followed by an insect ID session in one of the hands-on lab spaces.  These teens are AMAZING!  They work very hard on this project even though it’s 100% extracurricular.  They don’t get anything out of it except the experience of doing scientific research in the field and they do all of the work on their own time after school.  I’m kinda sad that they’re on summer vacation now because they are really fun to work with, but if all goes well most of them will be coming back next year.  AND their teacher, in the photo above, is going to be teaching a research class next year for the first time and some of these students will be doing the data analysis for this project as part of that class.  I’m really excited about that!

Last year was such a horrible year for monarchs that I’ve been unusually excited about every single monarch I’ve seen so far this year.  I point at them and yell “monarch!” every time I see one, even if no one’s around to hear me!  Just today I saw 6, two individuals and two mating pairs.  We don’t normally have a lot of monarchs in Raleigh at this time of year, so I’m not entirely sure what they’re doing here, but I hope they’re taking advantage of the very abundant milkweed that we’ve got out in the prairie at the field station.  This is normally the lull in caterpillar and egg production between the two bursts of activity we get in the spring and late summer, so it will be interesting to see if we get the same lull this year with all of these monarchs still flying around.

Speaking of milkweeds, we seem to have a LOT of my favorite milkweed insect this year…

These beetles have been very abundant his year, which makes me happy because I really love them.  Now I’ll admit that my love for these beetles began because I simply like the way they look, but they’re super cool.  They’re thought to be red with black spots because they feed on milkweeds and store the toxins from the plants the way ladybugs do.  Their scientific name refers to their eyes, which are split apart by their antennae.  These beetles are four eyed!  Plus, they’re crazy cute.  I’m loving watching these this year!

Randy Morphos at the Museum of Life and Sciences 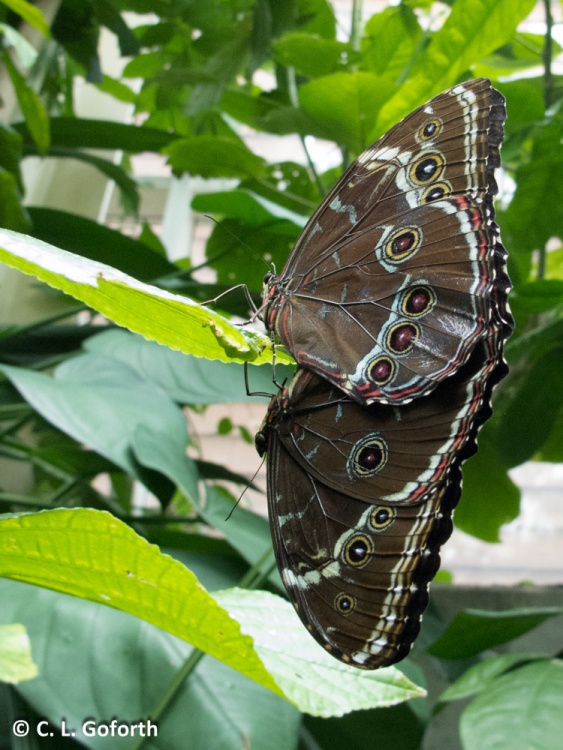 My visitor last weekend (my 70’s something aunt) wanted to go see the Museum of Life and Sciences in Durham, so off we went!  The museum is, I think, a little too heavily geared toward kids, but their butterfly house and insect zoo alone make it worth the price of admission.  As with many other butterfly houses, the bulk of the butterflies are tropical, but the enclosure is huge and they have a lot of butterflies so it’s a really nice one.  Sometimes you can go into an outdoor enclosure and see native butterflies and moths too!  I love people watching in butterfly houses.  I can’t tell you how many people walked by this amorous pair of morpho butterflies and said, “Wow, that one is HUGE!” without even noticing that it was actually TWO butterflies involved in some X-rated action.  Am I the only one that notices the difference?  Another bonus: I got to see a little exhibition of Alex Wild’s photos in the gallery space outside the enclosure.  Woo!

And speaking of randy animals:

A couple of weekends ago, one of my volunteers came into my office to tell me that they’d seen a pair of mating black rat snakes outside the classroom building during the citizen science walk he led.  I went down to check it out and found them still at it.  What I hadn’t realized was that the snakes were attracting a lot of attention from the kids attending the first ever Museum birthday party at Prairie Ridge.  Apparently the kids had been watching the snakes for some time before I arrived.  I would be willing to bet some parents got more than they expected at a cute little innocent child’s birthday party when their offspring started asking one of the most dreaded questions: “Mommy, what are those snakes DOING?”  :)

And that’s it for this week!  I’m still working on my post about my recent Bug Shot excursion and look for Swarm Sunday in a few days.  I might even get it up on Sunday this week!