It’s winter in North Carolina.  That’s not to say that it’s cold here everyday because that’s certainly not the case.  It was close to 75 degrees yesterday!  But, we have had some very cold days and several nights where the temps have dropped well below freezing.  It’s cold enough that there aren’t many insects out, so I’m always excited when I see one. Recently, however, there’s been one place that I know I can see live insects outdoors everyday, regardless of the weather or the temperature!  My main office is in this lovely trailer at the museum field station where I work: 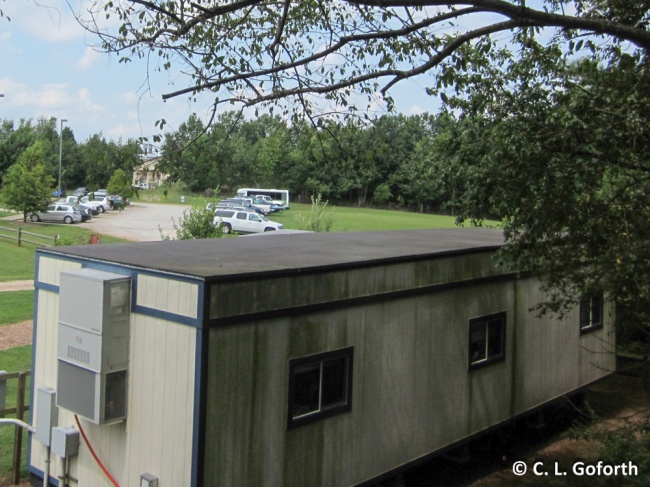 Back of the office trailer

Classy, eh?  As you can probably tell from looking at it, our little office building is not very weatherproof.  Cold seeps in during the winter, the AC seeps out in the summer, the doors don’t seal well, and the three rooms vary from too warm to too cold with no room in that perfect Goldilocks zone.  The trailer has two lights on the front, one by each door, and they come on at night.  Only one works.  For the last three weeks, a moth has been sitting in the exact same spot on the wall of the trailer when I’ve arrived at work each day, right next to the working light: 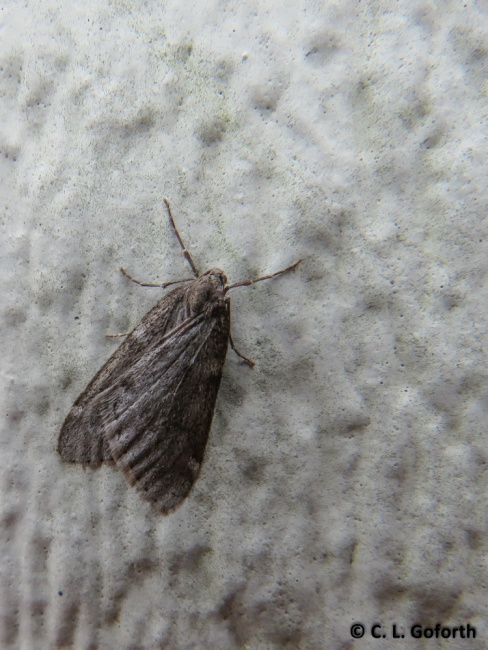 I wasn’t convinced it was even alive after a week and a half, so I poked it.  It moved a bit (though not much as it was a chilly day), so it has clearly chosen that spot.  It seems like a bad spot, right out there in the open on the white wall, but the moth apparently likes it.

I often leave work after dark, so I look for the moth every night when I leave to see if it’s still there.  I couldn’t say why exactly, but that little moth, hanging tenaciously to the side of the trailer day and night, amuses me.  Over the last few weeks, however, it’s been joined by other moths of the same species, one more every 2-3 nights.  Warm, cold – it doesn’t matter. Recently I counted 8 moths near the light when I left for the evening:

Most of the moths are gone by morning; only that one moth I’ve been seeing for weeks in that one spot is left on the wall once it gets light.  I couldn’t say whether the rest have left under their own power or have been eaten by something, but the next night there will be just as many moths back by the light when I leave.  I suspect they’re hiding during the day and coming back to the light at night.

Now we all know moths are attracted to lights, so seeing moths near a porch light isn’t all that exciting.  What fascinates me about these particular moths at this particular time is how cold it sometimes is when they appear.  I don’t really expect to see insects out where they’re exposed to the cold and weather (these get rained on fairly often and got snowed on last week), plainly visible to predators, on days where the temperature barely gets above freezing.  But there they all are!  We had a few mornings with heavy frost last week and that little moth by the light was practically frozen solid, frosted over like everything else.  Yet it moved when I poked it after it had a chance to defrost.  It’s definitely still alive and is presumably capable of hiding during the day if it wanted to.

I’ve never seen moths on the wall of the trailer in the winter before, so this is a new experience – and one that I don’t know how to explain.  I’ve gone down to our outdoor classroom building to see if there are moths near the light on that building, but there never are.  The walls are brown, the light faces the forest instead of the prairie, and the building is largely unheated, so maybe it’s not as good a spot for the moths.  There are also no moths near the much larger lights in the parking lot, nor on the concrete building across the parking lot where the Musuem’s wet collections are stored (whitish, superior climate control).  There’s something about this particular spot on the trailer that these moths like.  My best guess: they like the light and the heat that oozes out of the walls.  The walls are still quite cold on the outside, but perhaps they are just enough warmer than the surrounding area that the moths can warm up a bit?

I might not understand why they’re there or how they are even capable of coming and going in such cold weather, but I enjoy my moths.  It’s nice to know that even on the coldest nights, I can go out and see a half-dozen little chilly insects hanging on the wall.  I might not live in a place that is warm enough to get lots of insects year around anymore, but at least I know those little moths are out there.  That’s good enough.

16 thoughts on “My Mini Moth Mystery”