Whew! It’s been a really busy few weeks! I recently received a grant to start up a citizen science after school program (which you’ll hear all about at some point – it involves bugs!!) and have poured almost every moment of my work time into that since the beginning of February. Then, right in the middle of that chaos, I attended the first ever conference for the Citizen Science Association. That took me to San Jose, CA last week! One conference activity that I really wanted to do and couldn’t was a bioblitz of downtown San Jose. If you don’t know what a bioblitz is, it’s a comprehensive biodiversity survey of an area, typically done over a short (or at least limited) time frame. People participating in the San Jose bioblitz were encouraged to photograph any species they saw and upload their sightings to iNaturalist, my favorite wildlife sighting website/app, throughout the meeting. I lead biodiversity survey programs that use iNaturalist all the time and I very much wanted to see what the people who oversee iNaturalist do when they lead programs, but I unfortunately needed to be somewhere else during the organized part of the event. However, the moment I had a few minutes free, I dashed outside with my superzoom camera to add some of my own sightings to the survey! Because it was California, it was lovely and warm and there were actually insects out in the middle of winter. I still haven’t worked out how to use my superzoom to take decent macro shots (I remain unconvinced this is even possible with my particular model…), but here are my five favorite invertebrates I saw in downtown San Jose!

I wasn’t at all sure I was going to get anything close to a focused shot of the many hover flies buzzing around the area, but this one’s not too bad, if a little far away… I honestly have no idea what type of hover flies these were (Toxomerus perhaps?), but I was thrilled to see them. Dozens of hover flies flying around in mid-February! Don’t think I’d realized how much I missed that sort of thing until I found myself standing on a sidewalk in downtown San Jose grinning like a fool and pointing excitedly at hover flies. I would bet several passersby thought I was totally nuts, but whatever. I was just so happy to see insects in winter again! 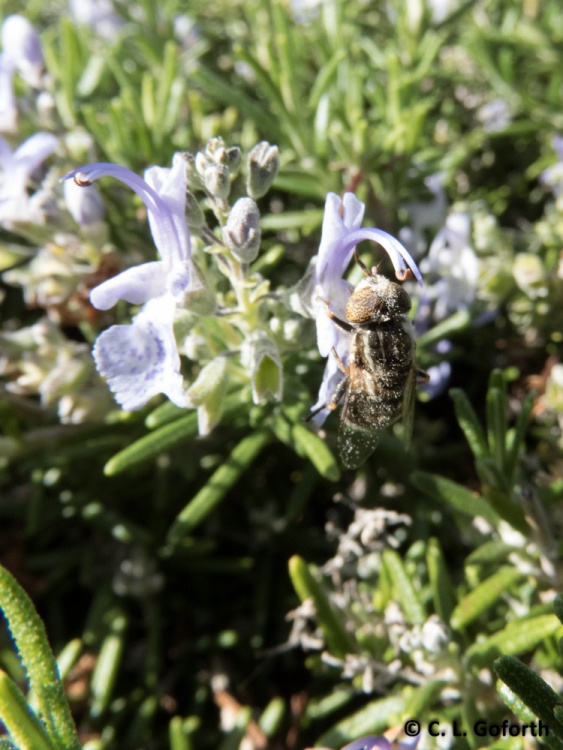 Found this beauty sucking on a rosemary flower! I mistook it for a bee from a distance (how embarrassing!), but was very pleased to see it was really a hover fly when I got close. The spectacularly speckled eyes make me think this might be something in the hover fly genus Eristalinus (which would probably also make it non-native), but if you couldn’t tell from the previous insect, these are well out of my identification skill wheelhouse. Whatever it is, it’s crazy pretty if you get a good look at it! Makes me feel a little sorry for all those people out there in the world who don’t even know something like this exists. 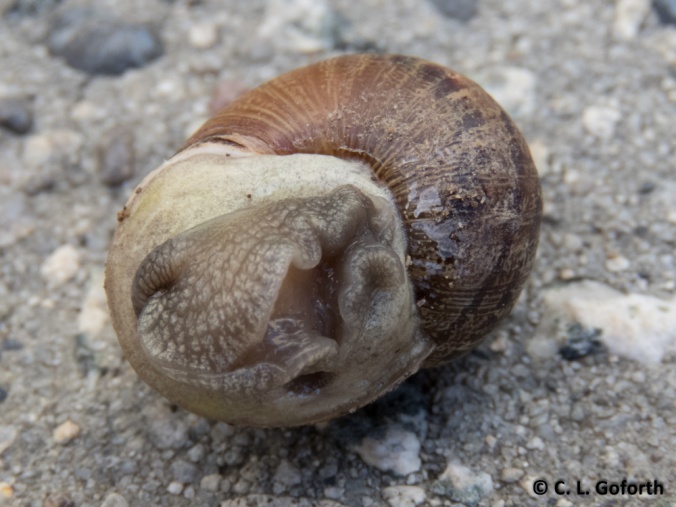 I found dozens of these huge snails in a planter outside an office building and was instantly struck by their beautiful form. One of the nice things about iNaturalist is that you can ask other iNat users for identification help. It’s no BugGuide for insects and other invertebrates, but a lot of people came up with the same ID for this one and I think they’re probably right: garden snail, Helix aspersa. Though we do have a lot of snails in North Carolina, these snails were quite large and were a surprise in the dry environment.  They are non-native and considered a pest in California, though these are also one of the snails that end up in escargot in Europe, so apparently edible!

Confession time: I have embarrassed many companions by squealing happily when I come across standing water and crouching down beside puddles to poke around for invertebrates. I found this little worm and about a dozen more just like it in a tiny puddle, just 1/4 inch deep, that had formed in a depression at the top of a light fixture in a park. Seriously, people must think I’m nuts… I was wearing a nice skirt, nice shoes, and a nice shirt with my hair pulled back in a tight bun – all business-like – when I yelled “Oooh! Water!!!” to no one in particular and plunged my hands into a random puddle. If you’re ever out in public with me, be warned that I might do the same thing to you. I have zero shame!

Who doesn’t love a good roly poly? This one didn’t roll up when I picked it up (sad!), but I thought its brown pattern was especially lovely for an isopod. These little guys are land-dwelling crustaceans, the lobster of the land! I love that there are little land crustaceans running around all over the place. If I can trust the iNaturalist users, this lovely brown one is the same species as the horde of more standard grey ones I found with it. Was hoping I had two species, but apparently I just found a weird one instead.

I absolutely loved getting out and looking for bugs in San Jose! I didn’t find all that many species, about 15 invertebrates in all, but that’s certainly more than I’ve seen in Raleigh for a while. I was also thrilled to discover that I was hot in the February sun! That happiness was short-lived however. After 11.5 hours and three flights back home, I stepped off the plane in flip-flops and shorts into 25 degree weather. It started snowing/sleeting a few days later and some schools have been closed ALL WEEK because of it! Nothing like being snapped back into reality the moment you get home…

For those of you that live in places that aren’t buried in snow or covered in a massive sheet of ice, what’s the best invertebrate you’ve seen recently? I want to live vicariously through you – I miss warm winters!!