On March 4th, I was in the midst of an all out race to prep curriculum for an insect-themed afterschool citizen science program I’m developing.  One of the things we wanted to provide to the state park rangers who will be implementing the bulk of the program was a couple of vials containing examples of hand sanitizer preserved dragonfly and damselfly nymphs.  That meant getting into the pond to look for nymphs.  I had spent four straight weeks in front of my computer working non-stop on the afterschool program and was thrilled to get outside, even though it was cold in the water and we found only a single dragonfly and a couple of snails.  One of my coworkers needed photos of the snails for our pond field guide, so I promised to take them home and photograph them.  I set up my tank and put the snails in and left them overnight so the bubbles would dissipate.  The next day, I realized that one of the snails had laid eggs.  A LOT of eggs.  There were only two snails in the tank, so it had to be this one:

And I have to say: those snails and their eggs enthralled me!  I was exhausted and overworked, so nothing gave me more satisfaction than watching my two snails, one of which was going to be a mother of several hundred baby snails, gliding around the tank every evening after work.  I took the photos we needed for the pond guide the day after I set everything up, but I kept watching and kept photographing over a few weeks.  Today I am going to show you what happened.  Let’s start at the beginning… 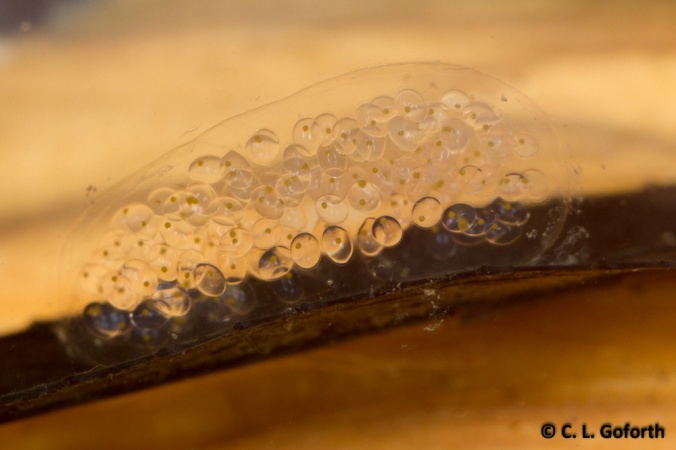 I added the snails to the tank on March 5 and left them overnight, so these eggs were less than 24 hours old when I first saw them.  I love that you can see a little dot in the center of the mostly clear eggs!  Nutritious yolk perhaps?  A little cluster of cells that would become the snails?  I really have no idea as I know little about snails, but I thought they were rather beautiful.  There were lots of clusters like this in the tank.

After 6 days, the shape of the little embryos inside the eggs were becoming much more snail-like.  You could see some little curved snail bodies and the very beginnings of their shells.  The color comes from the light hitting a piece of wood in the tank under the leaf these were laid on – they were largely transparent.

The snails were now 11 days old and you could definitely tell they were snails!  Most of the developing snails inside the egg cluster had mostly to fully developed shells, though still tiny, and had taken on a distinctively spiraled shape.  A few had already broken free of their eggs and left the cluster, including the one in the lower right of the egg cluster who is making a break for it in this photo.

By this point, most of the snails had escaped the egg cluster, though a few late bloomers were left.  You can still see the leftover egg compartments and the jelly that held the cluster together if you look hard.  Looks like there may have been a couple of dud eggs in the lot too that probably won’t ever hatch.

Baby snails!  There are now about 50 of these on the loose in the tank, each about 2-3 mm long.  They’re absolutely tiny – small enough you’d mistake them for shmutz on the glass if you didn’t know what you were looking for – but they move pretty darned fast for such tiny little animals!  They’ve spread out across the entire tank in just a couple of days.  For some reason, I feel like this is an impressive feat for a 2mm long snail.

And, now that the baby snails have hatched, I can look at their shells and tell that they are pouch snails and not the ram’s horn snails.  That meant that possible baby mama number one above was the parent of dozens and dozens of eggs that are still developing and many more than have already hatched.  She was rather prolific in her laying and I just found another clutch today.  I’m going to have SO many snails in a couple more weeks!  In the meantime, I’m going to enjoy watching these grow.

While all of this epic snail drama was going on, I had a similar situation happening with a bunch of backswimmers.  I’ll share my baby photos of those guys soon.  In the meantime, have a GREAT weekend everyone!