Tonight was the night of my annual firefly evening program!  It’s been an awesome year for fireflies in my part of North Carolina, and the display over the prairie at work has been even more spectacular than usual.  There are literally thousands of fireflies of several different types and they make the most amazing pattern of flashing lights.  I showed them off last weekend to the 50 people to attended a family campout overnight at our field station, I went out earlier this week to try my hand photographing them again, and I went on the news yesterday with some live fireflies to promote tonight’s program, so I’ve had fireflies on the brain all week.  It seems only fitting that Friday 5 feature fireflies this week!  Let’s kick things off with some photos of some local fireflies I took in my whitebox last night, the ones that went on the news with me.  This one is, I believe, Photinus pyralis, the common eastern firefly:

These are far and away the most common fireflies I see at my home and at work.  They are about 1 cm long and have a lovely pink and black patch on their thorax, plus they make an awesome yellow-green J shaped flash pattern that’s really easy to see.  They don’t feed at all as adults.  I am still ridiculously excited about running around in my yard catching these and do so at every opportunity.  My neighbors probably think I’m crazy, but I don’t mind.

This one was almost half the size of the individual above: 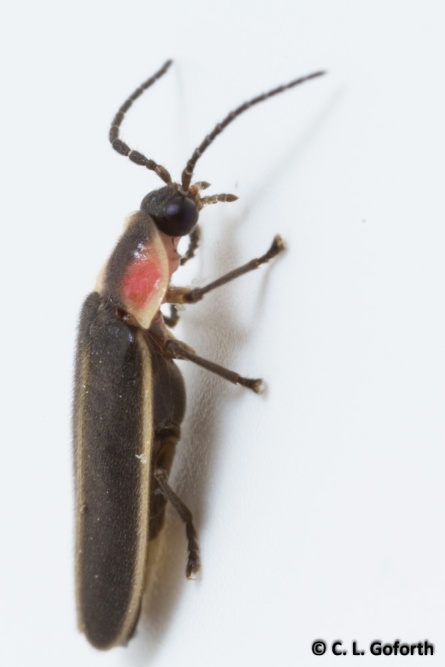 I found it under a leaf on a bigleaf magnolia tree.  It was actually a little hard to find, a tiny firefly on a HUGE leaf!  I never got to see it flash, but given the difference in size and the pattern on the thorax, I am fairly confident this is another species and not just a really runty P. pyralis individual.

This one is from the predatory genus Photuris:

The Photinus-Photuris story is rather legendary among entomologists.  Female Photuris are known to mimic the flash pattern of their Photinus relatives, luring unsuspecting males who are eager to mate in close before they eat them.  I imagine it going down like this:

I know I shouldn’t make up insect conversations in my head, but really, how can you resist?

Now when I found this individual, I only had one collecting vial with me and it already had a Photinus inside.  I thought that surely I could put the two of them together for a few minutes during the day without them eating each other, right?  Next thing I knew, the Photuris was biting the Photinus!  I wanted to show both off when I went on the news, so I ran back to my office for another vial and pulled them apart.  The Photuris took a big glob of fluid with it when I got them separated and quickly ate it all.  The Photinus seemed just fine though, in spite of having a rather large amount of fluid removed from its body, and they both went on to become media darlings on the news.

This is my yearly attempt at getting a good firefly photo at night, taken a few days ago on a rainy, cool evening:

Fireflies over the prairie

This is 14 somewhat long exposures stacked to create a single image.  The flash patterns in this photo are far and away the best I’ve gotten, so I’m encouraged to try again and see if I can improve upon this at my next opportunity.

And finally, I’m going to leave you with a video I took tonight during the program.  There are a lot of kids and their parents talking in it, but you can see the start of the evening’s firefly display.  It was dramatically better just 15 minutes later, but there wasn’t enough light for me to film it, so this is the best I could do:

Are any of the rest of you seeing fireflies?  A cousin of mine in the midwest mentioned last night on Facebook that he’d just seen his first firefly of the year, so I’m hoping there are lots out and about and many of you are getting a good show this year!

And with that, I go to sleep so tomorrow I can teach an unknown amount of people about ladybugs and citizen science at a big event we’re having at work.  Could be 5 people, could be 1000.  Should be fun regardless!

12 thoughts on “Fireflies on the Prairie (Friday 5)”