At the base of each one of those little craters is a monster:

Well, they’re monsters if you’re an ant!  Antlions, you see, are predators and they wait for their unsuspecting victims to slip into the cone-shaped pits they construct and tumble down to the bottom.  The pits are lined with fine, loose sand, so the ants have a hard time getting back out and they’ll slide back down to the bottom every time they try.  Sliding down to the bottom is bad if you’re an ant as that antlion is lying in wait for you, jaws poised to snap shut around you, just below the surface where they’re hidden from sight.  Once an antlion gets you, your life as an ant is probably over.

A lot of people haven’t played with antlions much, so I wanted to share a series of photos I took recently of that antlion above re-burying itself after I dug it up to take some photos.  These larvae crawl around backwards and they enter the dirt the same way, butt first.  The bewildered antlion sat on top of the sand for a moment before it realized it was back in its usual home.  Then it started digging.  The butt disappeared first:

Then most of the abdomen disappeared:

It was quickly up to its thorax in sand: 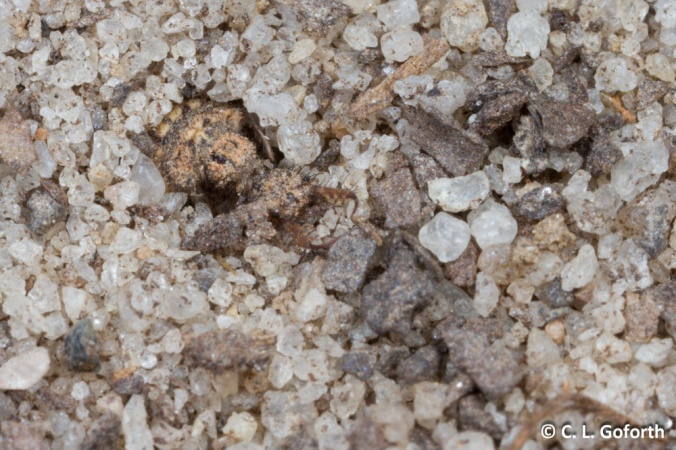 Then the head and thorax started to disappear:

All you could see was the mouthparts for a moment…:

… then the whole larva was swallowed by the sand!  This process took just a few seconds from start to finish, so it’s fast.  Over the next hour or so, it built itself a new cone-shaped pit by throwing sand all over the place, then it waited, lurking at the bottom of the pit for a hapless ant – or other insect – to become its next meal.

Antlions are crazy cool insects as larvae, then (at least in this species) they roll themselves up in a ball of dirt to pupate before turning into a damselfly-like adult:

Antlion adult – may not be the same species as the larva…

Check out the long, hooked antennae!  That’s the easiest way to tell these are not damselflies.  I know I’ve preached about this before, but it’s my very biggest insect misidentification pet peeve so I feel it bears repeating.

So there you have it!  An antlion larva burying itself in sand.  Next time you see a pit, think about what lurks beneath the surface.  It’s the stuff of ant nightmares…