It has been incredibly warm along the east coast of the US until just a few days ago. My birthday is in mid-December and I spent part of that day outside collecting insects in the pond with a group of high schoolers who are doing a research project with me.  We had been worried it was going to be very cold, but it was a gorgeous 75 degrees!  And, I saw DRAGONFLIES on my birthday.  Not just one dragonfly, either.  No, I saw more than one individual and TWO species!  That’s never happened before, so I was thrilled beyond belief.  Thank you  El Niño!

I saw 6 of these dragonflies on my birthday: 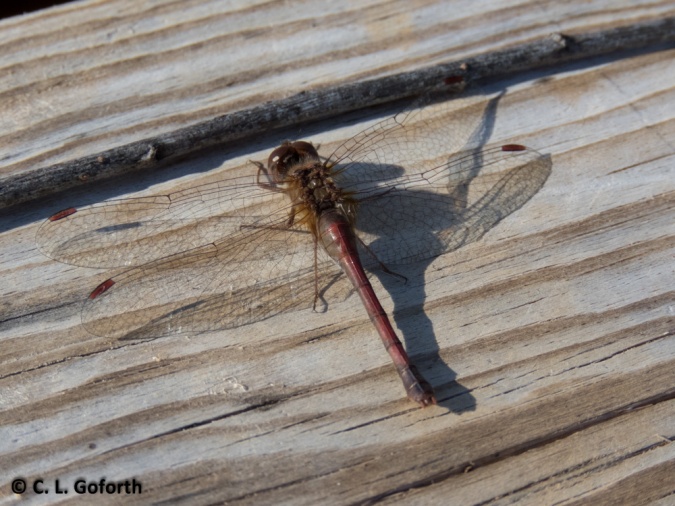 That’s an autumn meadowhawk (Sympetrum vicinum), a dragonfly species that flies at the very tail end of the season.  If someone told me they’d seen a dragonfly in December, this is the one I’d think they saw because they fly later than most other dragonflies in the US. Though they’re not commonly reported so late, people do occasionally see them in December, even January in some years.  I saw dozens of them throughout November and up until the 18th of December.  There were so many out this year!

I saw most of the autumn meadowhawks resting on the wooden platforms we use for teaching classes near the pond or on bare patches of dirt on the ground:

This particular species is not as inclined to spend all their time around the water as other species, preferring to perch away from the shore.  I did see a few fly out over the water briefly while I watched, but most were sitting on the platforms or the ground. Not surprisingly, they were all sitting in the full sun and with their bodies positioned so that they could soak up as much sun as possible. While it was very warm on my birthday and a few other days on either side, there were some cooler days mixed in too. The autumn meadowhawks were flying even on those days, but tended to make short flights from a warm sunny patch to another warm sunny patch rather than taking longer flights. They also let me get really close before they flew away.  They apparently didn’t want to fly more than necessary on the chilly days.

I’ll write more about the biology of this species at a future date because this is very interesting.  Autumn meadowhawks are rather strange dragonflies!  However, it was not the only species I saw on my birthday this year.  I also saw one of these:

A December sighting of a common green darner is definitely abnormal!  In the past four falls, the latest I’ve seen a green darner at the pond was September 26.  Seeing one in December was therefore shocking.  I have to wonder where it came from.  Was it passing through, a hugely late migrant that was headed south for the winter? Or did the warm weather trick a nymph in the pond into thinking it was spring so it emerged? Either way, I was very surprised to see this dragonfly in December.  It unfortunately whizzed past me at speed and I got just enough of a look at it to identify it.  It didn’t stick around to pose for photos…

North Carolina is certainly not the only place that has been seeing dragonflies far later in the year than normal this year.  I’ve heard reports and seen photos of autumn meadowhawks from places like Massachusetts and Maryland from December and a few from Canada in late November.  The warm weather seems to be prolonging their season so that people all up and down the east coast have made unusual spottings.  For this dragonfly lover, it makes me happy to see dragonflies so late in the year.  And, it’s only 4 months until the dragonflies start to come back in the spring in my area.  That’s not too bad of a wait.  Not too bad at all.

8 thoughts on “Dragonflies in December”