Today’s Photography 101 topic is practically made for me: water!  Here’s my choice of photo: 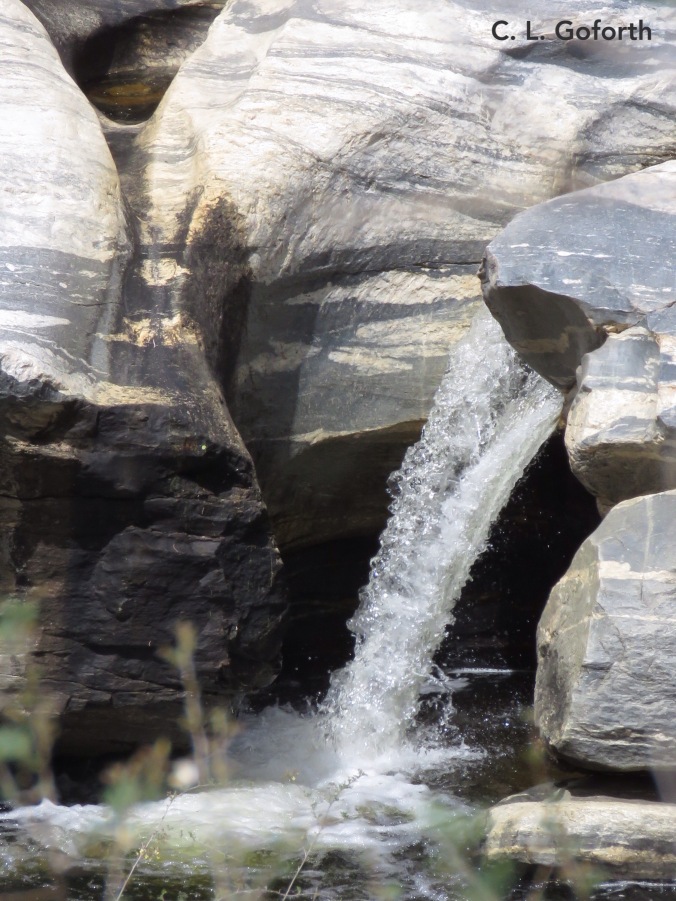 This is a waterfall on the same creek I shared yesterday, in Sabino Canyon just outside Tucson, AZ. I share it because it’s water, but also bacause it illustrates something important in stream habitats, a natural barrier.  This creek is full of crayfish.  Crayfish don’t belong in Arizona and every species you can find there is invasive.  They compete with native species in the state’s streams and alter the habitats as they burrow into streambeds.  I always hated coming across crayfish when I was working in streams in Arizona as the streams where you found them were often highly impaired.

However, a lot of aquatic species have a hard time moving further upstream once they encounter a natural barrier like a waterfall.  In Arizona, waterfalls are often the furthest upstream you’ll find invasive species like crayfish.  In fact, in this particular stream, you find crayfish up to a point called Anderson Dam (a little further upstream from this waterfall), but not any further upstream.  That also means that some species are only found above the dam, such as a cool species of damselfly called the Sabino dancer.  The species is found outside of this canyon in a few other places nearby, but this is one of the best places to see them.

Waterfalls are beautiful, but also important dividers in stream systems.  That makes them both beautiful AND interesting to me, so I’m always happy to come across a waterfall.

I am going to be traveling tomorrow, so probably won’t be able to get a post up until Friday, but I’m going to keep at it for a while.  Look for another new post coming soon!