The Photography 101 assignment for the weekend was to explore the rule of thirds/composition and create a gallery, so I spent a fair bit of the weekend looking for interesting things to photograph.  And it has been a great weekend!  I’d been away from North Carolina for 6 days and it’s amazing how much changed in just those few days.  It was still winter when I left.  Now it’s spring!  Gorgeous weather and fun activities made for an excellent couple of days.

I work on Saturdays, so I spent a small part of the day out and about to see what’s happening currently  at Prairie Ridge.  I saw my first butterfly, my first carpenter bee, my first frog, my first snake, and my first blooming redbuds of 2016.  I heard Fowler’s toads and bullfrogs and found the snake when I heard a bullfrog scream and went to see what was trying to eat it.  I saw FOUR green darners at the pond (migrants most likely) and two species of damselflies, though I didn’t get close enough to any of the odonates to get photos or ID the damseflies beyond noting they were both from the family Coenagrionidae as they whizzed past into the cattails.  Hopefully I’ll get a better look soon!

These photos are from my walk around the grounds (click on any image to open the gallery and read more about the things depicted!): 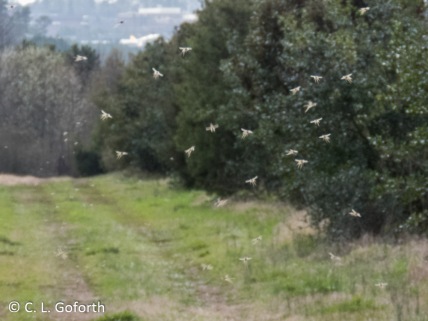 A big swarm of midges I encountered on the trail. Sadly, the superzoom point and shoot camera I had with me takes TERRIBLE shots of high speed things, so this ended up a lot more blurry than I’d hoped…

My first carpenter bee of 2016! Sucking on nectar of a redbud, which started blooming while I was out of town. 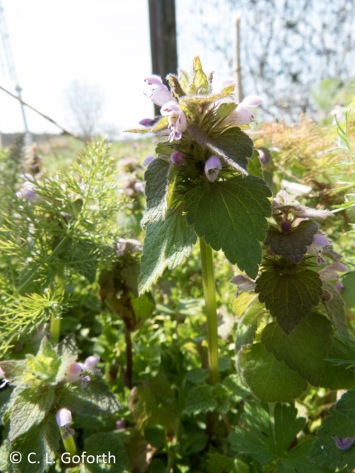 No insect in this photo, but deadnettle is an important food source for the early pollinators that emerge here in the spring. It’s a weed and spreads like crazy, but it does provide important food in the winter when other sources of nectar are scarce.

Pawpaws are an awesome American fruit tree that a lot of people don’t know about. Their flowers, which are just starting to bloom in this photo, end up a deep purple-red and smell a little like rotting meat. They are highly attractive to flies, though they weren’t quite far enough along to attract pollinators yet.

I don’t know what this tree is – a bay, myrtle, or holly – but it was blooming like crazy and was absolutely covered in bees! Bees that flew away the moment I pointed the camera at them… How can you have hundreds, maybe thousands, of bees on a small tree without capturing a single image of one close up? This was the best shot I got, with a bee flying by in the upper right corner.

The weather was amazing, so it was great to get out and wander a bit.

After work yesterday, I hopped in my car and drove to the NC coast.  I do a lot of presentations for teachers about ways they can incorporate citizen science into their teaching, and I presented to a group of awesome teachers this morning.  They had a pontoon boat trip to a nearby barrier island planned immediately after my presentation and I was thrilled when I was invited to go along.  Such an awesome experience!  We saw a seal sitting on a tiny island (they’re apparently uncommonly spotted where we were), seined for fish and other animals alongside the island we visited, and measured water quality. The weather was perfect, so it was a fantastic experience.  And of course, I took photos!  Here are some highlighting the water quality sampling and animals we encountered: 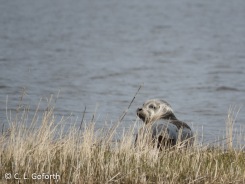 Crab remains on the beach. This was once a good sized crab, one that people would probably be happy to eat.

Not an invertebrate, but I can’t resist putting in this less-than-stellar photo of a flounder! This was the best seine capture, a mere 2 inches or so long. It’s amazing how well they blend in!

A fly on the beach. I’m assuming this is a brine fly or some other type of fly that specializes in salty habitats, though they were very flighty and I really didn’t get a good look at any of them. 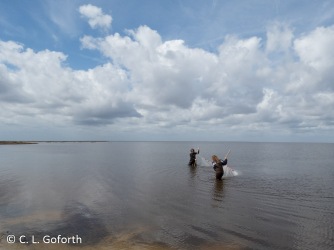 Teachers seining for fish and other creatures. 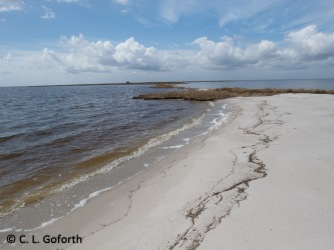 The barrier island we visited. Quite small, but loads of fun.

I drove back through a bunch of nasty rainstorms afterwards, but it was totally worth it to get on a boat and learn some cool things about the NC marine environment.  I don’t spend nearly enough time on boats these days – and I even live in a state that actually has water now.  It’s sad when you spent more time on boats in the desert southwest than you do in a rainy place with real rivers and huge lakes!

So that was my weekend, which I loved because I got to spend a lot of time outside taking pictures of things I saw.  What did you all see?  Anyone seeing dragonflies where they live yet?  I’m excited that it’s warmed up – there should be some baskettails and corporals out in my area soon and the whitetails won’t be too far behind!

6 thoughts on “My Weekend in Photos”