bycatch (n.): the accidental capture of non-target species.  This term originated in the marine fishing industry, but has expanded to include other non-target species captured in other forms of collecting or harvesting.

National Moth Week is, as you may have gathered from the name,  a celebration of moths that asks people to learn more about and observe moths during the last full week of July.  However, you never just get moths when you set up blacklights!  You get a ton of non-moth insects coming to the lights as well, and today I want to feature some of the great non-moth insects I found this year.  Let’s explore them by order and start with the…

I find lots of field crickets and katydids at my lights, but I find a lot of these as well:

That’s a common scaly cricket immature (on my siding that’s clearly in need of a good powerwash to remove the algae!).  These are supposed to live on bushes or under debris near water, so I can only presume that they are taking advantage of the low spot in my yard that’s almost always sopping wet.  I love the shape of these crickets, just a little different from the standard cricket body plan.  This one is pretty dark compared to most of the scaly crickets I see too – the ones in my yard tend to be white and just a little translucent.

Earwigs creep a lot of people out, but they’re harmless:

Depending on the species, and I don’t know which one this is, earwigs can eat plants, decaying organic matter, or insect prey.  I didn’t see this one hunt at the lights as many other carnivorous insects and spiders do, so I suspect it might be a plant or humus eater rather than a predator. 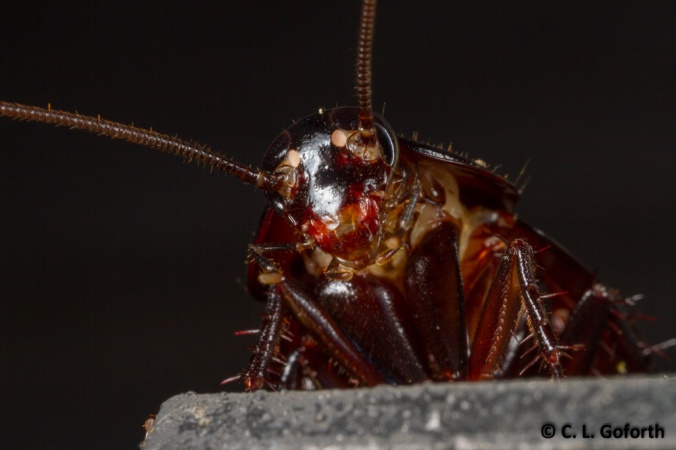 We all know and love (to hate) cockroaches!  I found loads of them near my lights this year.  I suspect they’re coming out of the storm sewer drain in front of my house.  This particular roach was looking down at me from the porch light by my front door, so I got a good look at its face for once.  Normally that’s tucked away below the plate-like front section of the thorax, the prothorax, where it’s hard to see.

Most people don’t enjoy this species:

Brown marmorated stink bugs are invasive in the US and can invade homes in pretty large numbers.  As you might imagine, the scent of many stink bugs together in one place is none too pleasant!  These also feed on a variety of fruit and vegetable crops, so they’re not popular with farmers and gardeners either.  However, in spite of the problems they cause, I think they’re rather elegant looking bugs.  The coloration and pattern are subtle, but sort of pretty too.

This bug is a fun one: 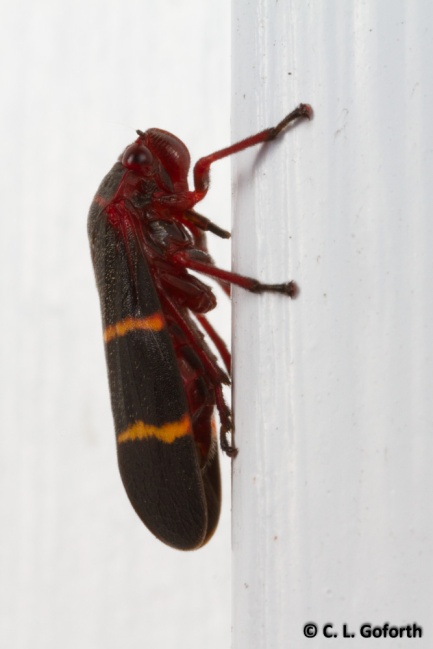 That’s a two-lined spittle bug.  They get their name from the foamy secretions they excrete as they feed as immatures.  If you’ve ever seen something that looks like a wad of foamy spit hanging off a plant, you may be looking at spittle bug secretions!  They’re considered turfgrass pests, so people who care about their lawns often despise spittle bug nymphs.  Me, I’d rather have bugs than healthy grass, so I love having spittle bugs in my weedy lawn!

That’s a rustic borer. It’s actually a common beetle at lights in North Carolina, but I rarely see them in my yard.  They a borer beetles, so their larvae grow inside of trees.  They’re not very picky – almost any hardwood tree will do for this species.

I am absolutely terrible at identifying wasps, but most of the ones I see at night look like the parasitic wasps in the Ichenumonidae and Braconidae families:

No idea what this one is, but I like the way it looks, thus I’m including it here.

Caddisflies start off life in water and emerge onto land as adults.  I have a large river that flows close to my house, so I suspect that’s the reason that I get so very many caddisflies at my lights.  I know this one is a longhorn caddisfly:

… but I’m not sure which family this one belongs to:

I can ID aquatic caddisfly larvae easily enough, but once they’re adults they honestly all look about the same to me…  Someday I’ll at least learn my caddisfly adults to family!

And finally, we come to the flies!

These also have aquatic larvae, though they don’t live in the kinds of aquatic habitats you normally think of: 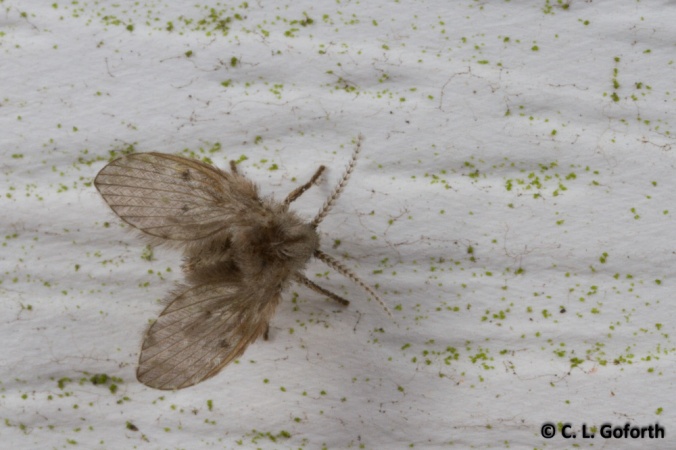 Moths flies are called drain flies as larvae as they are often found living in the water trapped in the U bends of drains in locker rooms, hospitals, bathrooms, and other places where skin cells and other human waste gets trapped in little nasty puddles of water.  The larvae are actually rather interesting looking, but the adults are downright adorable!  They’re tiny, but oh so fluffy.  I just love them!  I suspect these might be coming from the storm drain as I tend to see a lot of them at lights at night outside my house.  I don’t care how gross they are – I am always happy to see a moth fly!

I am going to post one more blog related to National Moth week, one that features my favorite insect find of the year and my favorite photo.  Look for that post coming soon! (And it’s already written, so this time I really mean it’s coming soon!)