The monarch butterfly is one of the most readily recognized and iconic butterfly species on the planet.  While for some insects we might not even know what the immature stage looks like, the monarch has been heavily researched for many years and we know more about how it develops from egg to adult better than most insect species. We have a lot of monarchs at the museum field station where I work, so today I’m going to share the life cycle of the monarch butterfly, every stage for this one.

All insects start off as eggs, so let’s take a look at a monarch egg:

The monarch eggshell (called the chorion in insects) is pale and heavily textured with intricate patterns.  However, unless you get a really good, up close look at one, you’re mostly going to see a pale off-white football shaped object stuck to the underside of a milkweed leaf.  They’re small, but still readily visible if you look closely.  The egg eventually hatches, and the first caterpillar stage emerges: 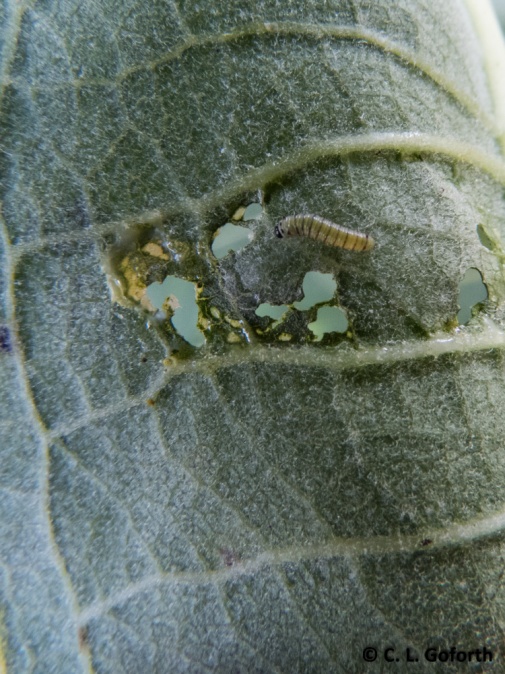 Immature insect life stages are called instars and an insect will move from, say, first to second instar by molting its exoskeleton so it can grow.  The first instar larva of the monarch is quite small and looks different from the later stages in its development. They have entirely black heads instead of the striped heads they develop later and they’re largely translucent.  Eventually, they eat enough that they outgrow their first instar exoskeleton and molt into a second instar: 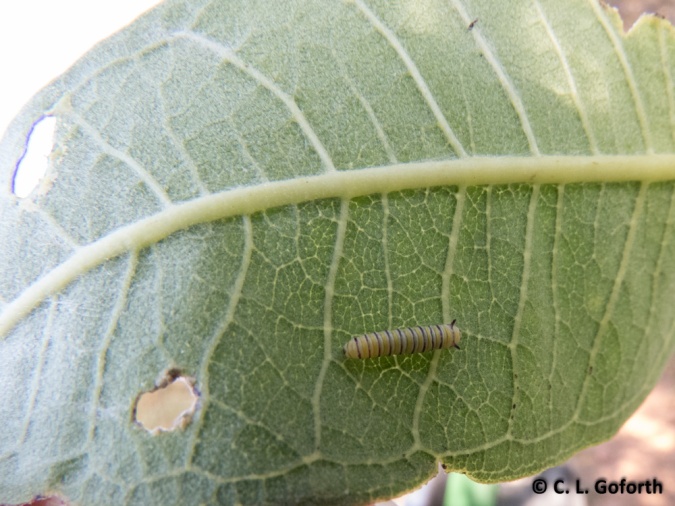 Seconds start to exhibit the stripey heads and the coloration that people associate with monarch caterpillars.  They’re less translucent than the firsts and start to show the white lines that make up a large part of the pattern on the later instars. The tentacles that come off the front and back of the caterpillars begin to show. Second instar monarch caterpillars have longer tentacles in front and only tiny stubs in the back. Both sets of tentacles are much more pronounced in the third instar:

Third instars have obvious back tentacles, but they’re still fairly short. Both sets of tentacles are much longer in the fourths:

The tentacles on the front of the fourths are quite long, and about twice as long as those in the back.

The fifth instar is the last stage: 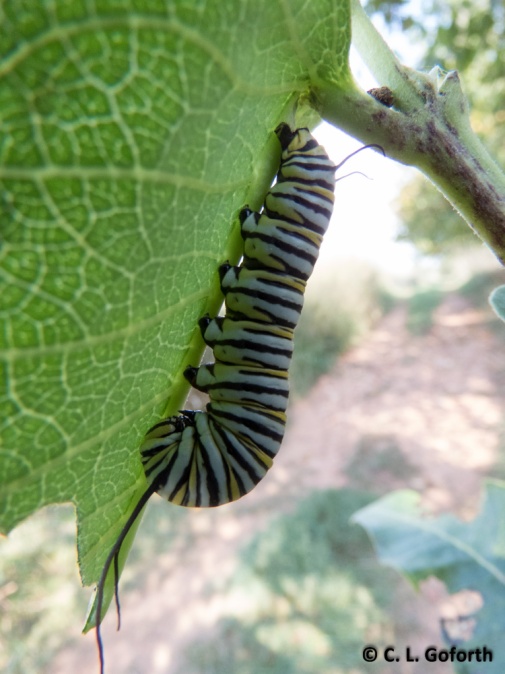 The tentacles are very long on the fifths!  The caterpillars are also quite large, about the size of your pinky finger.  They also have the color pattern most people most associate with monarch caterpillars, black, yellow, and white stripes and a striped head.

Once the fifth instar caterpillar has eaten enough and grown to a certain size, it can pupate.  The caterpillars typically leave the milkweeds they feed on as larvae and find another location to pupate:

Monarch pupae are gorgeous!  Their pale green coloration helps them blend in with vegetation.  They also have a line of metallic gold spots along one side.  As they get closer to emerging as adults, the color changes.  The exoskeleton of the pupa becomes transparent and you can see the black and orange of the monarch and the outline of different body parts tucked inside.

The pupal stage of insects is really pretty amazing, transforming an insect from a worm-like structure to something with wings (usually).  They’re essentially completely rearranging their bodies!  Eventually, however, they finish their adult development, crack open the exoskeleton of the pupa, and pull their adult body out.  They then pump hemolymph (insect blood!) into their legs, mouthparts, and wings to expand them to their fully extended form.  Then the exoskeleton “cures” and hardens.  Once that happens, the insect is as big as it will ever get and has all its body parts in the position they will remain the rest of its life:

The only change an adult undergoes is the loss of body parts.  With butterflies, you can often get a good idea of whether it is young or old by looking at the wings.  Complete wings with brightly colored scales tend to indicate younger adults.  Tattered or missing wings and dull spots where scales have rubbed off generally mean you’re looking at a butterfly nearer the end of its life.

Monarch males have scent glands that help them find their mates. Once they find a female, they will mate:

The female then lays an egg on the underside of a milkweed leaf.  She will leave it behind to lay more, often on other milkweed plants.  The caterpillars that hatch have to fend for themselves and ultimately only a small percentage will make it to the adult stage.

Monarchs have a very complicated yearly life cycle.  I am not going to go into much detail here, but they have multiple generations a year.  The monarchs that fly north from Mexico typically make it as far as Texas before they lay a bunch of eggs and die. The monarchs that hatch from these eggs spread further north in search of milkweeds and nectar, and then they too lay eggs and die.  This can happen one or two more times before a special generation is produced in late summer or early fall.  This generation lives close to 6 months instead of just a few weeks and they are the ones that will fly to Mexico, overwinter there, and then fly back to the US in the spring.

So there you have it: the complete monarch life cycle – and the first Life Stages post.  Hope you enjoyed this one, and I’ll post another species soon!