If you’re reading my blog, it’s likely that you read others. I have a list of over 60 blogs that I follow regularly, everything from insect blogs like mine to other science blogs to cooking and photography blogs. I do have one general science blog that I particularly love. If you’re not reading Not Exactly Rocket Science by Ed Yong, you really should! He is a marvelous science writer and posts clear, concise, and humorous pieces on new scientific discoveries. He has degrees in biology and biochemistry, but he’s quite good at reporting on just about any area of science you can imagine. I enjoy his blog immensely, though I particularly love his frequent insect stories. He likes the strange and amazing stories and the experiments with weird methods that yield interesting results. There are some truly crazy sounding experiments out there and Ed’s (and I’m going to call him Ed and pretend like we’re friends, even though we’ve never met) really good at finding them! He’s posted some great insect stories recently, that include the following:

This dung beetle’s air-conditioning unit is crap. No, really 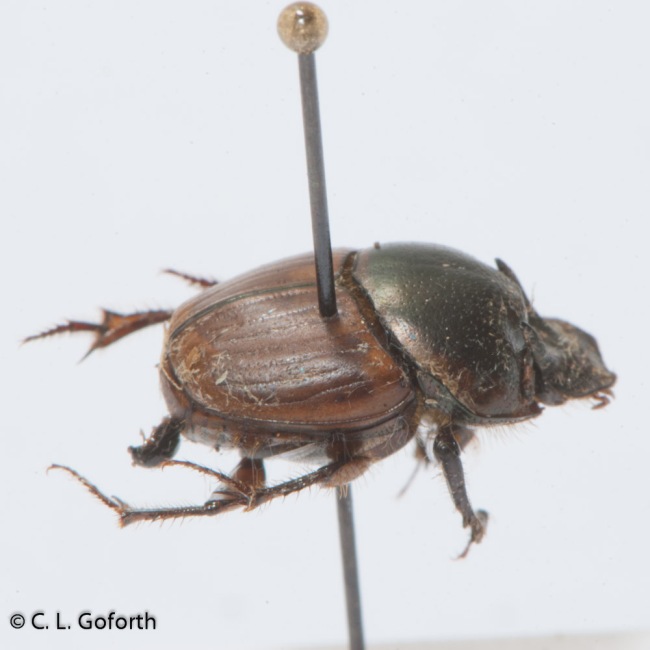 Representative, generic dung beetle photograph – not the species in the study

The title alone was enough to make me want to read this one! Insects are exotherms and they have evolved some ingenious means of keeping themselves cool in really hot weather. Take the dung beetle Scarabaeus nigroaeneus, a species that rolls its dung balls in the deserts of South Africa. You should read Ed’s take on this experiment, but the gist of it is this: researchers filmed dung beetles with heat-sensitive cameras to show how climbing on top of the dung ball periodically as they rolled them along was a very effective cooling mechanism. Plus, the experiment involved making little dung beetle socks to protect dung beetle feet from the scorching sands. Click on the link up there and read this piece. You won’t regret it!

The insect that hears like a human, with ears on its knees

This post is great! In it, Ed discusses how humans hear, a complicated series of steps involving several structures in our ears, and then compares it to new structures discovered in a katydid species that allows them to hear in a surprisingly similar fashion. Katydids have their “ears” on their front knees, but otherwise the sound detection structures are quite similar to our own. They even have a structure that is equivalent to our tiny ear bones! This post does a marvelous job of highlighting convergent evolution, how, as Ed put it, “good adaptation are rarely wasted on just one part of the tree of life.” Well worth the three minutes it will take you to read it.

Prisoners do science, help to save endangered butterfly

I really love stories like this! It features a program in Washington state that gets prisoners involved with conservation efforts by putting them to work in captive breeding programs for endangered butterflies, frogs, plants, and mosses. Apparently these programs are quite successful as the inmates are often producing stronger, more robust organisms than other conservation and scientific groups. The work also has a social impact on the prisoners who participate. According to Ed’s report: “They talk about how it completely changes how they think. Most people are in the prison yard talk about who did them wrong. Then, all of a sudden, guards will tell us they hear people saying, ‘Hey did you see how that moss was growing?’” I don’t know about you, but I LOVE the idea of felons excitedly discussion their mosses! What a great idea, and something I might never have known about without Ed’s help.

Everything you never wanted to know about the mites that eat, crawl, and have sex on your face

(I don’t have any photos of face mites, so here’s a graphical representation of five of them in a group together: • )

I am awed by the diversity of organisms that live on people! There are an unbelievable number of bacteria on humans, and there are also all sorts of little microscopic animals roaming around on us. There are, of course, the species that cause itchy problems like crab lice and head lice, but there are other creatures, such as mites, that readily colonize humans as well. Ed’s post on the subject WILL make you itch as you read it, but it’s an interesting read! It features how one researcher has recently implicated mites as a possible cause of the skin disease rosacea. It’s fascinating to think that a skin problem might be caused by tiny arachnids living in your hair follicles. (At least, I think it’s fascinating! You are, of course, welcome to disagree.)

To find out why this beetle has a spiky penis, scientists shaved it with lasers

Representative, generic dung beetle photograph – not the species in the study

As if seed beetles weren’t cool enough… They have several amazing behaviors, one of which I will get around to sharing one of these days, but I was also recently alerted to the fact that seed beetle males have very spiky genitalia. A team of researchers had studied the spiky seed beetle phallus and could only speculate on what the organ actually did. So, they shaved the spikes off to see how it impacted reproduction. The results generated more questions than they answered and we still don’t know what the leakage of seminal fluids into the female’s bloodstream (the result of that spiky appendage) actually does, but generating new questions is one hallmark of scientific experimentation. Science wouldn’t be nearly as exciting if we did an experiment and suddenly knew everything there is so know!

Hopefully I’ve convinced you that you should read Not Exactly Rocket Science, if you don’t already. I think it’s a great example of science writing at its best, so head on over and see what new and interesting things you can learn about life, the universe, and everything! You won’t regret it! Well, usually you won’t regret it. That face mite post you might regret just a little… *scratch, scratch, scratch*