We use a lot of Madagascar hissing cockroaches in the program I’m working for this semester.  They’re really great insects to work with because they’re big enough for the kids to get a good close look at them, yet they’re completely harmless.  Some of the kids have a hard time getting over the stigma that roaches are disgusting disease-ridden trash lovers, but hissing roaches are cute little forest roaches, happily eating decaying trees and other plant matter and turning them into very useful soil.  Even with the stigma against roaches, we can get most of the kids to at least pet the hissers and many of them will be brave enough to hold them.  It’s always fun watching a kid who’s very scared of insects hold the roach and watch their tense little body relax when they realize it’s okay.

We have a big colony of roaches that we maintain: 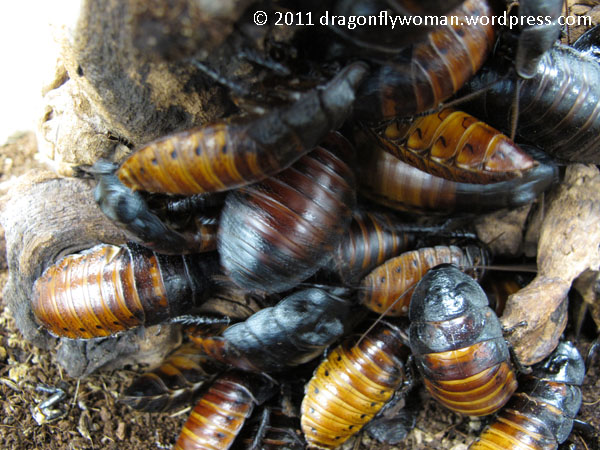 But squeamish little kids are going to be absolutely horrified if we pull the roaches we show them in the workshops out of the writhing mass of roaches in the big colony.  Heck, most of the preceptors and TAs aren’t willing to stick their hands into the big colony to extract a roach!  Instead, we put a few roaches, a boy and a girl, into smaller cages: 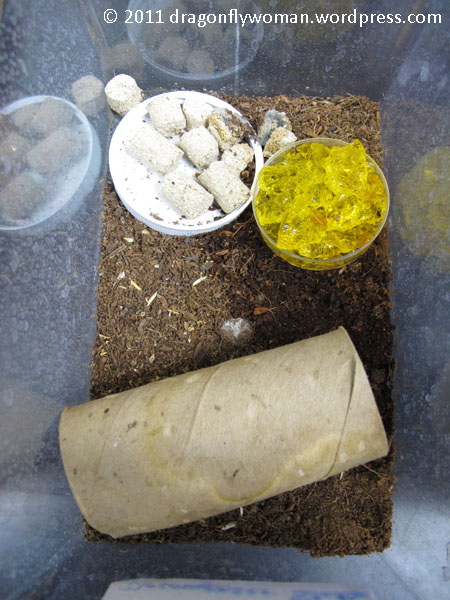 These roaches are easy to extract from their cages.  They are handled by thousands of children, dragged from their dark, happy place inside the toilet paper tube several times a day to be fondled.  These roaches have real names, not just names we make up every time.  They’re even written on labels on their cages!  Giving them names is often sufficient to make a squeamish kid open up and want to hold a roach, so they’re important.  Because they have names, the undergrads teaching the workshops and I also learn how individual roaches are going to behave when we handle them.  People start to develop favorites.  One undergrad won’t hold any roach but Winston because Winston has a particular personality that he likes.  My favorite roaches are Jeffrey and Bonita.  And here are 5 things I love about them: 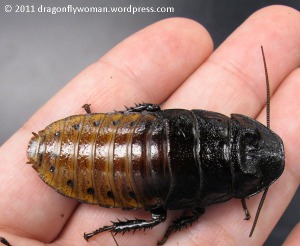 1) Jeffrey is the best roach ever to let kids handle.  He’s THE most mellow animal I’ve ever held, except for maybe the 30+ year old gopher snake with one foot in the grave (or maybe one fork of her forked tongue since she doesn’t have feet?) I held the last time I had a job working with kids.  Jeffrey just sits there as he is in the photo, completely calm and collected – even if kids drop him or poke him a little too hard or scream at him.  He’s (dare I say it?) almost sweet. 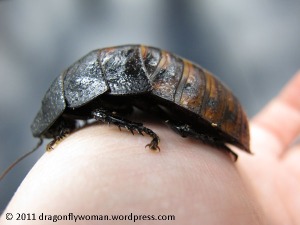 2) Bonita is spicy!  In stark contrast to her boyfriend (or maybe they’re just roommates…), Bonita is fired up and ready to go at a moment’s notice.  She is a runner when she’s poked and has a habit of racing straight up some poor kid’s arm or right into their laps.  Screaming sometime ensues.  One time Bonita made me look like a complete fool in front of a whole class of 4th graders.  I was telling them the rules for holding the roaches and one kid asked why I got to hold Bonita standing up rather than holding her close to the floor like they had to.  I said that I could do it because I knew how to hold Bonita so that she was safe.  Bonita had sat in one place for 10 straight minutes, completely still, but she of course chose that exact moment to lunge forward.  I didn’t even have time to respond before she launched off my fingers and smacked into the floor upside down.  The look I got from the kids… well, let’s just say they thought I was a sorry excuse for an adult after that.  But I love Bonita in spite of this incident!  Her fiery spunk is very amusing and she’s a lot of fun to pass around to the kids who are really eager to hold a roach. 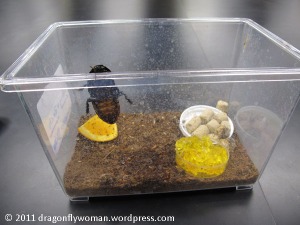 3) Jeffrey might be mellow, but he’s a sneaky little guy!  He’ll sit there doing absolutely nothing the entire time I have him out.  I can pass him from child to child and he’ll barely move.  I can set him on my leg and expect him to stay right there.  Put him back in his cage without the lid though and he’s out of there in a flash!  I don’t get how he can be so slow with the kids and so very speedy when he tries to escape.  Bonita never seems to want to crawl out, but you’ve definitely got to keep an eye on Jeffrey!

4) They have the cutest little faces!  Roaches hold their heads tucked up against their bodies under their thoraxes so they’re hard to see, but if you ever have a chance to flip them up so you can see their faces, they’re really quite cute!  Check out Jeffrey’s adorable mug: 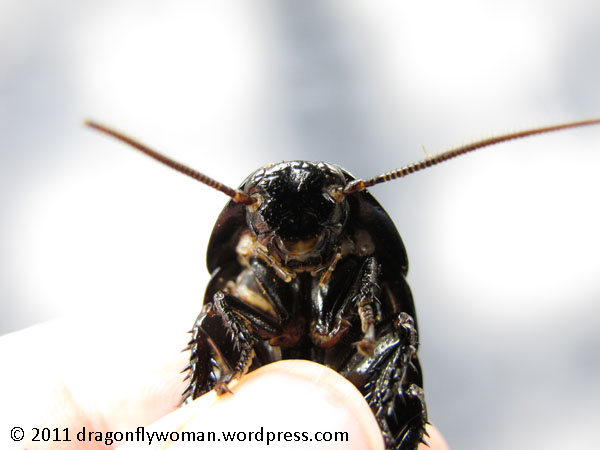 Giving the roaches names helps the kids get over their fear of them, but showing everyone Jeffrey’s face will often win over the last few holdouts.  Being able to look at their faces makes the roaches seem a lot less alien to the kids, and a whole lot less scary. 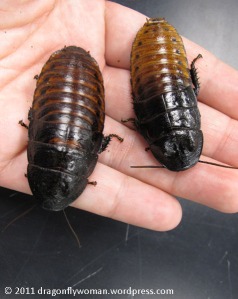 5) I know I probably shouldn’t because it’s so wrong to anthropomorphize the roaches, but I love imagining that Jeffrey and Bonita are a boyfriend and girlfriend.  They might not actually be getting any nookie in their cage, but he’s a boy and she’s a girl and they’re the only two hissers left on the planet as far as they’re concerned, so you never know.  Besides, it’s much more amusing to think of them fighting over who’s hogging the toilet paper tube while they sleep and who’s constantly leaving their exoskeleton on the living room floor.  You know, normal things that couples argue about when they co-habitate.  I always introduce the pair as Jeffrey and his girlfriend Bonita.  This probably spawns all sorts of horrible ideas in those little 7-year-old brains (yes, my cockroaches are living in sin, boys and girls!  Sin!), but it spills out before I can stop myself because that’s how they’re cemented into my brain.  Never sure exactly what to say when I’m asked if they’re married though.  I have no problem with the idea that they’re boyfriend and girlfriend, but married?  Well, that’s just  ridiculous.  :)

Now I know some of you might think that this is an April Fool’s post, but I assure you it’s not.  Honestly, I tried to come up with something clever to post for April Fool’s, but I was wildly unsuccessful.  So, you get to read about my roach love and my warped little mind that creates roach relationships where none may exist.  It’s probably just as good.