When I TAed for the Insect Discovery program at my university last semester, the kids worked their way through 4 stations and then got back together as a group to do drawings of insects at the end.  I posted some of my favorite drawings of imaginary insects the kids came up with several months ago, but some of the kids also did really excellent drawings of real insects they’d seen at the stations.  We used a water bug at one of the stations and the kids were fascinated by them, so they ended up in the drawings the kids did from time to time.  Today, I give you my five favorite giant water bug drawings done by 7-year-olds.  Prepare for total cuteness!

We would often attempt to feed the giant water bugs with the kids, so most of the drawings included the food we gave them, mealworms.  This lovely drawing includes a rather fanciful habitat (oddly enough, we do not use pink and purple rocks in the bottom of our containers), but it does include two mealworms for the water bug to eat when it’s ready for a snack.  They’re conveniently floating above the water so that they won’t drown before the water bug has a chance to eat them.  Pretty considerate, don’t you think? 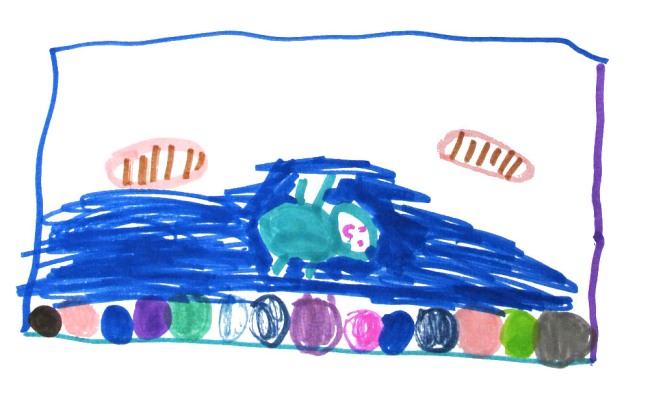 This gem of a drawing shows the water bug AND his food in the water, but take a look at the jaws on this one!  Apparently we didn’t do such a great job of explaining the piercing-sucking mouthpart to this kid’s group…  This water bug is clearly about to rip the mealworm on the right side of the page to shreds before it devours it: 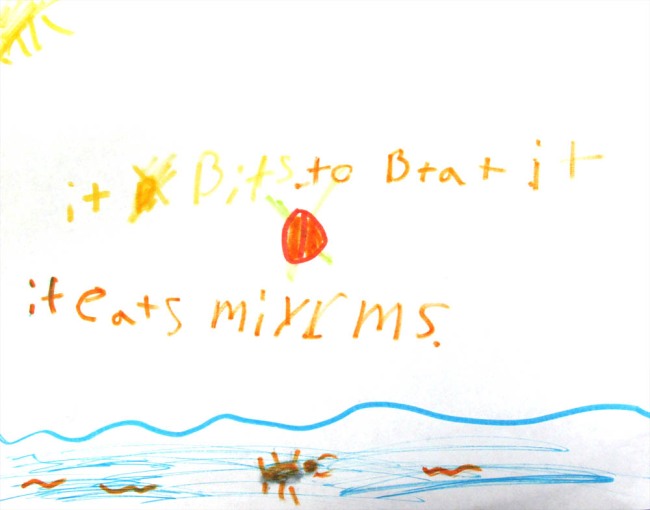 The kids were supposed to write down or include in their drawings where the bug lived, what it ate, and how it protected itself.  This one ‘bits” to “btat it,” which in adult English likely translates to “it bites to protect itself.”  It’s useful to be able to read 7-year-old when you look through Insect Discovery drawings.  :)

In the next drawing, a cockroach-centipede looking giant water bug is about to attack his helpless prey, the mealworm at the right.  The mealworm is apparently sentient and cries out for help, but as there’s nothing in the drawing except the water bug and the mealworm, I fear he is about to meet his demise. 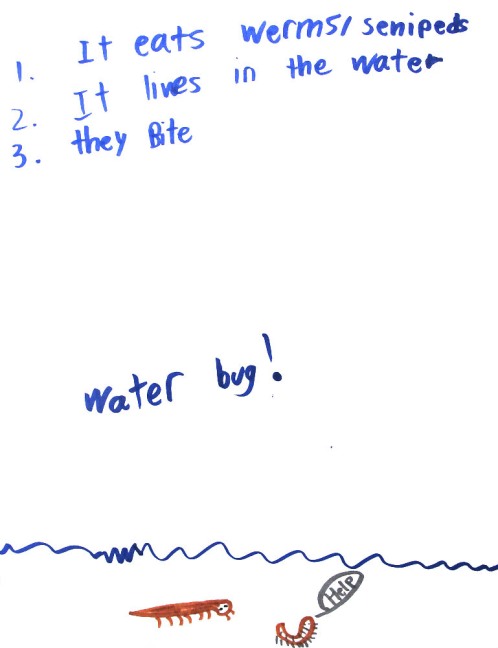 This drawing came with a thank you letter, one in a pile of 25 or 30 that a teacher made her kids write after their visit.  He claims the water bug was his favorite insect, and I believe him because this is really a pretty good drawing for a kid to do a week or two after he saw the water bug! 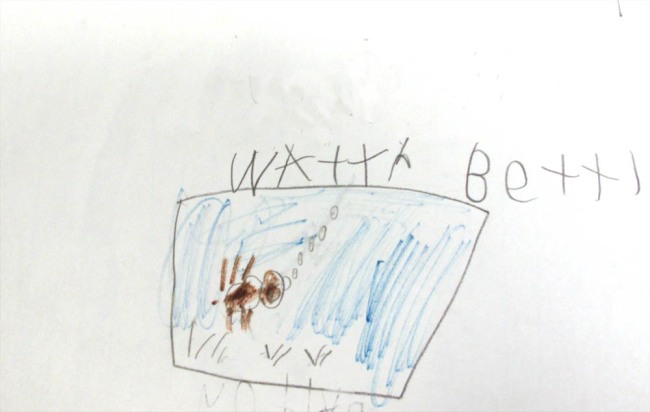 We’ll ignore the taxonomic mistake (it’s a bug, not a wattr bettl, or “water beetle” in adult English) for now and give the kid a break.  Not exactly sure what the bubbles coming out of the bug’s mouth are though.  Most of the preceptors teaching the kids discussed how water bugs collect oxygen at their back ends and pull it into an air space under their wings.  I know they did because when I asked the kids about their water bug drawings, they’d usually say something like, “They breathe through their butts!”  Not entirely true, but close enough.  :)

And last, I give you my favorite of the water bug drawings: 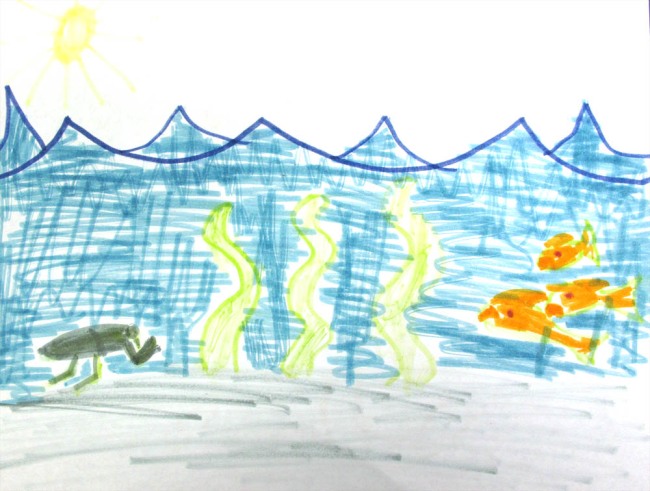 This kid clearly got the message that the water bugs can eat impressive things, including vertebrates like fish.  The drawing is spot on, with the water bug in a perfect sit-and-wait predator pose, aquatic plants drifting serenely in the water nearby, food about to swim toward it.  In essence: awesome!  I love this drawing.

Really, is there anything cuter than looking at drawings by young children?  Browsing through the drawings and talking to the kids as they drew them was one of the best parts of the entire Insect Discovery experience.  I hope the incoming TA thinks so too!