When I was a kid, I dreaded Sunday dinner.  We’d all sit around the table and my dad would turn the TV around on its rickety cart so that we could watch it during our meal.  We rarely watched TV during meals.  In fact, we watched very little TV period when my dad was home, just movies and the PBS series Nature.  I HATED watching Nature when I was a kid!  I realize the irony of this statement considering I’m now an entomologist and adore nature documentaries, but at the time I really did hate it.  We’d be eating some delicious Sunday dinner (my mom is a marvelous cook!) when Nature would show a parasite that someone had ingested with their food or maggots decomposing a dead raccoon or something.  Not the most appetizing thing to watch during dinner!  Normal families had already eaten their dinners by the time Nature came on, but not my family.  Oh no!  We ate late and got to see Nature in all it’s disgusting glory as we struggled to eat.

But that’s all behind me!  I LOVE nature documentaries now and I can stomach anything during meals, regardless of how disgusting it is.  So, today I give you my five favorite insect documentaries.  In no particular order, they are: 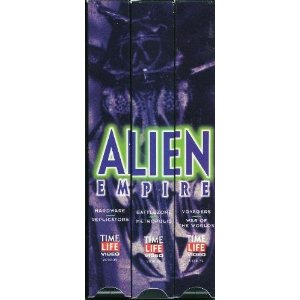 This was the first Nature series that I actually appreciated as a youth.  It aired in 1995, about two years after I’d decided I was going to become an entomologist, so it’s kinda old now.  It’s nearly impossible to find and hasn’t ever been released on DVD, but if you happen to own a VCR still and have access to the series on video (maybe it’s at your library?), it’s well worth the time to watch!  My favorite parts of the series (keep in mind these have stuck with me since 1995!) were a segment about an Australian beetle that mistakes brown beer bottles for female beetles and tries to mate with the bottles and a segment about what happens when a mated female fly is trapped in a fridge full of food after the power goes out (LOTS of flies when you open the door!).  The narration is witty and the cinematography was ground-breaking at the time.  It doesn’t compare to today’s cameras, but it was amazing back then and it still looks pretty good.  Check it out if you can! 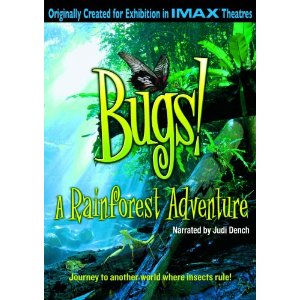 Okay, I’ll admit it: I’m only including this one because I don’t feel like Sir David Attenborough should hog the whole list.  I saw this in 3D at a science museum in Boston in 2006.  The videography is really excellent and the footage is impressive.  The narration…  Not so great, even with Dame Judi Dench lending her voice talent to the project.  To say the narration is juvenile is a bit of an insult to kids everywhere!  However, the story that they set up is actually pretty fun.  In the film, you follow a butterfly and a mantid throughout their life cycle from egg to adult.  Then they come together in the end, and if you know anything about mantids you can guess how that encounter goes.  (It’s interesting to read about the moms with kids that were traumatized by the ending of this film in the reviews on Amazon!)  I think this film is aimed mostly at kids based on the narration, but the footage is good enough I’m going to recommend it anyway – and I know I have some really young readers out there too! 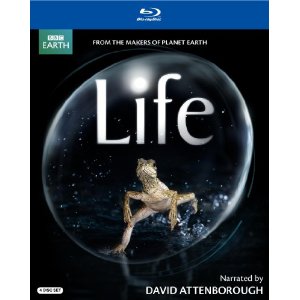 If you haven’t seen Life (or Planet Earth for that matter), you really should.  The cinematography is absolutely stunning.  Seriously, it’s so beautiful I find myself holding my breath at times!  While Life isn’t all about insects and features many other animals throughout the series, there is one whole episode devoted to insects.  It includes one of my favorite insect clips of all time too: a male Darwin’s beetle fighting his way up a tree, battling many males as he tries to win the hand (tarsal claw?) of the fair beetle at the top.  Watching the beetles fall out of the tree makes me laugh every time!  Seriously, this is nature at its absolute best!  If you have a Blu Ray player, this is one of only three films I own that I would absolutely recommend on Blu Ray over DVD.  And, you can choose between narration by Sir David Attenborough, British nature documentarian extraordinaire, or Oprah Winfrey if you prefer an American woman’s touch.  I personally prefer Sir Attenborough because I just can’t resist that British accent, but to each his own.  :)

Ah, Microcosmos!  Some people love it, others hate it.  I love it.  This is probably the most artsy of all insect documentaries and is about as old as “Alien Empire,” but it’s still well worth the time to watch.  There’s next to no narration and very little information provided about the species you encounter.  This isn’t the film to watch if you have a hankering to learn some interesting fact about insects!  However, I don’t think it’s actually meant to be an educational film, rather an attempt to make people appreciate the beauty of insects and their relatives.  The film is gorgeous and the macro technology the filmmakers used still looks great!  My favorite scene involves two slugs doing the horizontal mambo.  Normally I wouldn’t think this was so interesting, but when you see their two bodies curling around one another and the glistening of their slime, all set to a dramatic and operatic score…  Well, that’s another thing entirely!  And who doesn’t love a little good slug porn?  :)  Watch this movie when you’re in the mood to be amazed by the beauty of insects, slugs, spiders, etc.  You won’t be disappointed.

Life in the Undergrowth, BBC

This is the granddaddy of all insect documentaries as far as I’m concerned!  Another BBC series narrated by Sir David Attenborough, the 5 part series Life in the Undergrowth is all about insects.  Unlike Microcosmos, this series is highly educational.  However, it’s also a ton of fun!  From slow motion video of dragonflies flying to walking sticks that trick ants into dispersing their eggs to predatory glowworms that trap flying insects attracted to sticky bioluminescent silk strands, this series does a phenomenal job of highlighting the amazing world of insects.  The cinematography is great and the series moves along at a good pace, giving you just enough interesting information without leaving you bored.  If you have even a passing interest in insects, you should watch this series!  It’s excellent.

Those are my top 5.  Anyone else have others they’d like to recommend?

Unless otherwise stated, all text, images, and video are copyright © 2011 TheDragonflyWoman.com.  All images in this post from Amazon.com.