When my husband and I got married, we had intended to do a sort of barbecue tour of the southern US for our honeymoon.  We planned to start in Arizona and head out across the southern states by car, sampling smoked meats of the various regional styles of Texas, Tennessee, and both Carolinas.  I was really excited about this because you’re looking at a gal that will soon own THREE grills!  But then we had to move our wedding date and because we had only a single day off before we both had to go back to work, the honeymoon was put on hold.  We still haven’t done the BBQ tour we’d planned, but we recently went to one of our intended stops, Memphis, to celebrate our anniversary.  We ate a ton of BBQ, listened to some excellent blues, and toured the sites of the city.  It was a really fun trip!

But what does this have to do with insects, you’re probably asking yourself?  I carry a camera around with me everywhere, so I always have one on hand when I come across interesting insects.  Spring was just starting when we arrived in Memphis and it rained the first two days we were there, so the pickings were a bit sparse, but I did see a few things!  These were my favorite:

The eastern carpenter bees (Xylacopa viginica) were out en masse!  There were thousands of them flying about the Memphis Botanic Garden when we visited, all males that appeared to be looking for nesting sites.  At one point, we took a seat in a shady spot off the main path and there were hundreds of the bees flying around the little wooden structure that shaded the bench.  It was magical sitting there among so many huge bees as they searched for places to build nests.  It was one of the highlights of my trip!

The Japanese garden at the botanical garden was in full bloom and the cherry trees were stunning!  There were surprisingly few pollinators out though.  I only saw two insects on any of the cherry blossoms.   I never did get a good shot of this little fly because it was quite windy that day, but I’m gong to share this with you anyway: 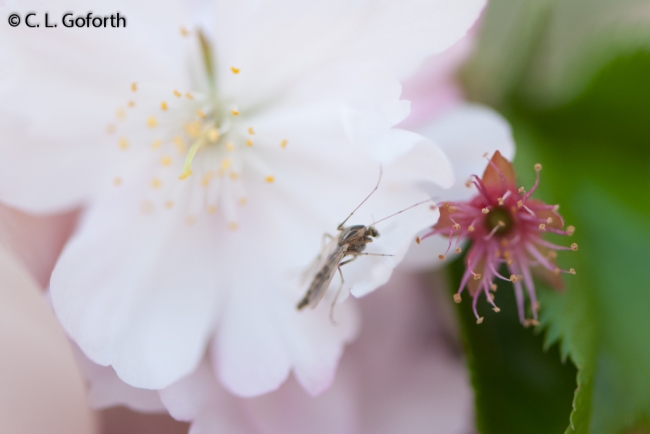 Fly. Honestly, I'm not sure if this is a mosquito or a midge or even something else. Morgan - I'd appreciate some input if you read this!

We also saw  this cloudless sulphur (Phoebus sennae) flitting about the flowers:

I don’t really like butterflies, but even I’ll admit that they are pretty, even the less flamboyant whites and sulphurs.  And cherry blossoms – wow!  I’d never seen them in person before and they were amazing!  We also saw this:

And these caught in flagrante: 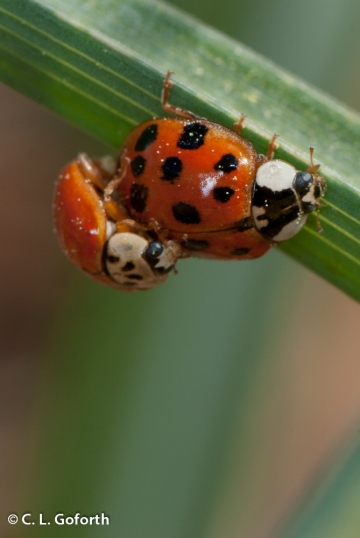 The ladybugs were definitely out and active during our trip!  I actually see rather few ladybugs in Arizona (there are a lot of them here – I just don’t see many for whatever reason), so it was exciting to see so many of them flying around and getting busy making a new generation of brightly colored beetles.

As an extra special Friday 5 bonus, if you ever get tired and thirsty, just look for this beetle in Memphis:

The Green Beetle Tavern claims to be the oldest in Memphis.  We came across this in the middle of the day as we walked from the South Historic District to Beale Street so we didn’t stop in, but I’ll have to make a special trip there next time I’m in Memphis.

I think I would have seen more insects if we’d planned our trip even a week later.  You have to work with what you’ve got when it comes to insects and we just happened to be there at the slightly wrong time.  Still, I really enjoyed seeing a new place and exploring the things Memphis had to offer.  And, I have an excuse to go back someday.  There are still a lot of insects I haven’t seen there!  :)