Greetings from a new venue for the Dragonfly Woman!  I’m currently in Santa Fe attending the joint meeting of the North American Benthological Society (NABS) and the American Society of Limnology and Oceanography (ASLO).  I’ve been to NABS meetings in the past and they’re quite fun as far as scientific meetings go.  You spend your days going to scientific talks (and there are TONS, so it’s not hard to find at least one thing you’re interested in during any given time slot) or poster sessions and your evenings socializing with the other members of the society.  The NABS meetings are far and away my favorite meetings to go to of all of the scientific meetings I’ve been to because they’re a reasonable size and really emphasize the social aspects of the society.  As a not-at-all-outgoing person, I appreciate this.  Forced scientific social time is good for me.  :)

This year… well, I can’t say the meeting is going to be quite as fun for me, though I’m sure other people would heartily disagree.  There are double the people at the meeting due to the addition of the ASLO members, and I find the crowds disconcerting.  The social activities are, I’ll admit, a bit overwhelming for me due to the gigantic number of attendees and that makes them far less fun for me.  The meeting is also spread across several buildings for the first time since I’ve been attending the NABS meetings.  This wouldn’t be a problem if the buildings were close together, but some of them are several blocks apart.  This makes scheduling your day a lot more complicated because you can’t just flit from room to room easily like I have in the past.  I feel obligated to sit through talks I’m not as interested in hearing because something better is too far away to get to in time.  And then there are a bunch of little personal touches that the NABS meetings always include that are absent from this meeting, making it feel just a bit less special.  None of these things are the end of the world of course and I’m sure I’ll enjoy the conference anyway, but they do make the meeting marginally less appealing to me than in former years.

The meeting officially started yesterday.  I hadn’t planned to go to the opening ceremonies last night, but even if I had, I wouldn’t have made it to Santa Fe in time.  When estimating how long it would take to get to Santa Fe by car, I stupidly used the time it took to get there from where I used to live in Colorado rather than Tucson, even though I’ve driven both ways a hundred times.  That combined with being hit by an absolutely enormous, blinding storm on the interstate in the dark meant that I arrived much later than planned and completely missed all of the things that happened last night.  But that’s okay.  I did get to see a spectacular sunset shortly before the mother of all storms slammed into my car and that made the drive 100% worth it.  This photo doesn’t even begin to do it justice (it was, after all, taken one handed and out the window of a car going 75 mph on the interstate and I certainly wasn’t taking my eyes off the road long enough to frame the shot properly – not ideal photographic conditions!): 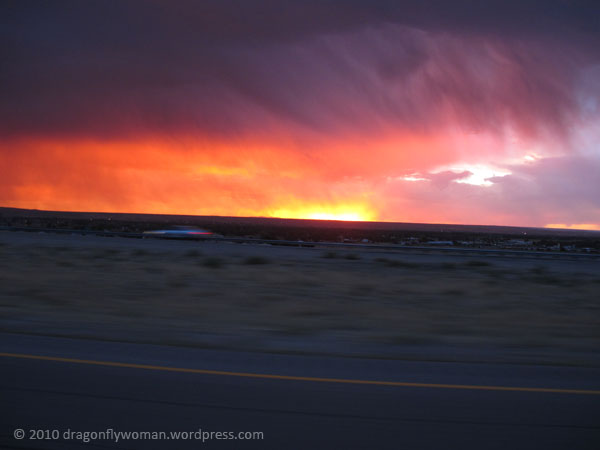 Because I missed the official first evening, I consider today day 1 of the conference.  And this means that, as promised, I am going to try to blog every day this week and highlight my favorite talk or poster of the day.  Just as a warning, I might jump outside of the aquatic insect realm this week.  This isn’t an insect meeting and there are tons and tons of other aquatic related topics covered here that I find fascinating, so one non-insect talk might work its way in.  My favorite talk today did at least deal with another freshwater invertebrate: the crayfish.  It was a very interesting talk and I am very excited to share some of the information that was presented.

However, you won’t get to hear about it until tomorrow.  I am going to have a one day delay in getting things posted (Day 1 will be posted on Day 2, etc).  This is to ensure that I have enough time to get a decent post together rather than throwing something up that doesn’t make sense.  I will have a new post every day through Saturday though, so I hope you’ll check back often.  There will be some very interesting and very new science posted over the next 5 days.  It should be worth your while!