My last post about National Moth Week!  Can you tell I really love this event?  It gets me outside looking at bugs both at work and at home each year, so it’s a ton of fun. However, this year’s fun was greater than usual thanks to a couple of things, a great insect find and a photo I’m really pleased with. 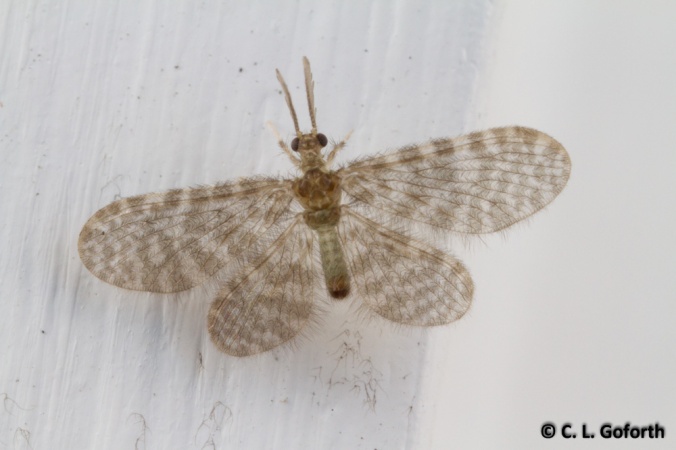 I saw it and started yelling, “Ooh, ooh, ooh!” and jumped around happily.  If my neighbors didn’t already worry about me, that little episode probably convinced them I am nuts.  However, I quickly came to my senses and took a whole bunch of photos of it. I knew it was something unusual, something I definitely haven’t ever seen before. Once I got a ton of photos, I ran inside and started looking through my field guides.  It wasn’t in any of them, but that didn’t surprise me.  It was so weird! I wasn’t even really sure what order it belonged to, but I thought Neuroptera (the net-winged insects) was the most likely.  So, I started randomly clicking through all of the Neuroptera photos on BugGuide to see if I could find it.  Happily I did!

Family Dilaridae, the pleasing lacewings.  Nallachius americanus specifically.  There are two species in the US (one is only found in Arizona) and about 70 species worldwide.

According to BugGuide, this group of insects does come to lights at night, but it’s rarely seen or collected.  The larvae are apparently thought to feed on beetles under bark, but there’s no mention of what the adults feed on.  I kinda felt like I should catch it and add it to my collection since it may be the only one I ever see, but I eventually decided against it.  I don’t have a scientific reason to collect any more, so I just watched it for a while and it eventually flew away.  I’m happy with just having photos of it.

This find totally made my entire National Moth Week!  If the pleasing lacewing had been the only thing I saw the entire week I still would have walked away happy.  Love getting to see/learn about new things, especially things that are entirely new.

A few days later, however, I got my favorite photo of the week: 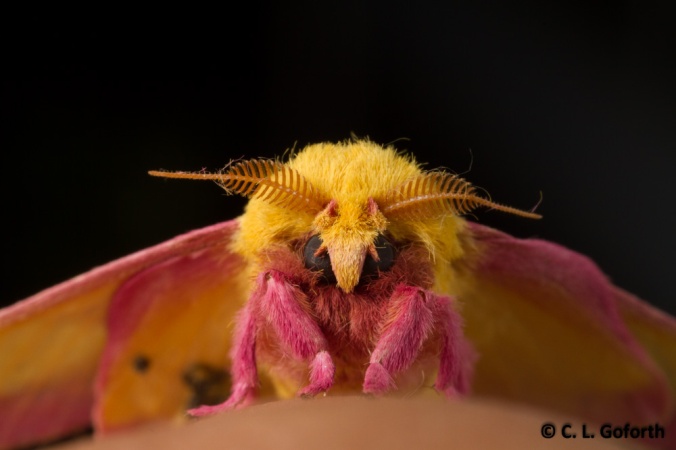 I love rosy maple moths!  They’re super common in my area, but they’re so fuzzy and gaudily colored that it’s hard not to adore them.  This one had something weird going on on one of its wings (you can see the black markings on the hind wing on the left side of the photo – that’s not normal), but it let me handle it.  That meant I could get a good shot of its face, which I thoroughly enjoy doing. I snapped away and it eventually wiggled around into the position in the photo above, letting me get a dead on shot of its face.  Look at all that fuzz!  All that pink!  Those amazing antennae! This immediately became my favorite photo of NMW.  I spent the last few days of the event attempting to get similar head shots of other moths, but none of them worked out quite as well (i.e., didn’t amuse me as much) as this one.

And with that, I am done posting about National Moth Week!  I have so many other things I want to write about still, so I am hoping I can keep this momentum going a little while longer.  I still have an entire year’s worth of Dragonfly Swarm Project info/data to post too!  Look for more posts soon!