Warning: The creepy factor of today’s post is going to be quite high.  Just want to give you a head’s up before you dive in.

The Sonoran Desert is an amazing place!  It’s greener than people expect, we’ve got awesome giant cacti like the saguaro, and the diversity of life is astounding.  Many entomologists think southern Arizona and northern Mexico are among the best places to study and/or collect insects in the world, and people come from all over specifically to check out our insects.  (People also come from all over to stay warm during the winter, but that’s a story for another time!)  Of course,  Arizona is also known for several other animals, some of which can actually be dangerous if you’re not careful, like the rattlesnake in the photo, or just plain scary for a lot of people.

Today I’m going to introduce you to several non-insect arthropods that live in my area.  These are things a lot of people are very scared of, but these are some amazing animals that deserve their own post!  Let’s begin with an arthropod I’ve already featured in a post about my field site and the undead animal I fished out of the pond there:

I freely admit that these things scare the daylights out of me.  They’re fast, they’re enormous (up to 8 inches long!), and there’s something about those legs that I find incredibly disturbing.  (It’s not the number – millipedes don’t bother me at all – but the way they move…)  Still, you have to admire this animal.  They have stunning coloration that even I can appreciate.  They’re fierce predators, using their modified forelegs (called forcipules) to inject venom into their prey and paralyze them before they chew them up.  Watching one of these things eat is both horrifying and awe-inspiring!  Plus, you have to respect any arthropod that gets this big.  I’m always amazed when I see them running around the desert at night – and very, very thankful that my tent has a good zipper on it!

I find that people who are scared of spiders are often able to appreciate tarantulas.  It probably helps that they move slowly and are generally harmless to people, plus they look fuzzy enough to be stuffed animals.  I think tarantulas are great!  Desert blond tarantulas tend to stay near their underground burrows to hunt, though males can venture further when searching for females, especially after monsoon storms.  I think the coolest thing about these spiders is how they defend themselves from predators.  When disturbed, they will brush their hind legs over the top of their abdomens, which releases a cloud of hairs.  These hairs have hooked barbs on them, which means they embed themselves into the eyes, mouths, and noses of things that think a tarantula might make a tasty treat.  The embedded hairs are known to be terribly irritating.   Although I have not experienced this defense first hand, I have a feeling it’s rather like getting the tiny spines from prickly pears stuck in your fingers, i.e. really, really annoying! 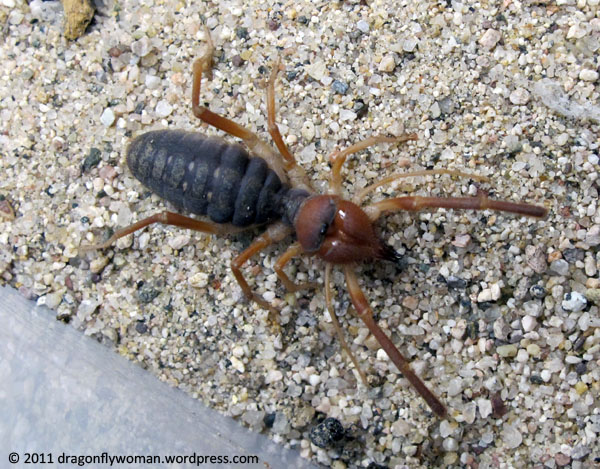 Solifugids are rather creepy looking arachnids, but you just have to love them!  Also known as sun spiders or camel spiders, solifugids can get quite large in certain parts of the world.  In the Sonoran Desert, they can approach 2 inches in length, but I rarely see any that big.  Solifugids are predators and they can chase down their prey with those long, fast legs.  The blurry photo is the result of this solifugid stalking a cricket and refusing to sit still!  That pointy black bit up at the front is the business end of the solifugid, powerful mouthparts they use to rip apart their prey before they liquefy their food and eat the resulting soupy mess.  These animals are often erroneously said to be dangerous to humans, but they really can’t do much to you except bite.  Honestly though, who’s going to pick up an animal that looks like this and give it a chance to bite them?  I love to watch them, but I leave these guys alone. 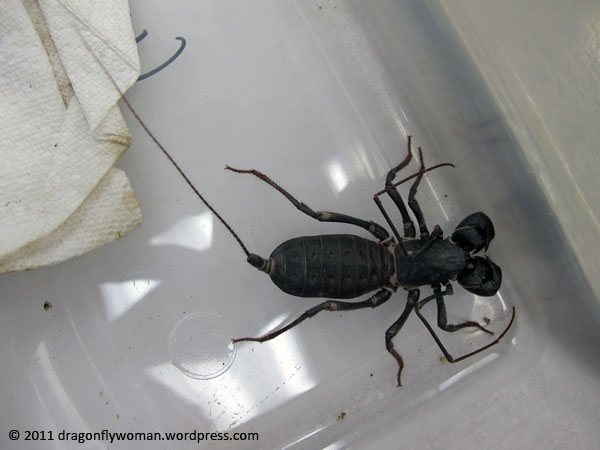 Vinegaroons, also known as whip scorpions, are gnarly looking beasts, but their scary looks belie their laid back demeanor!  They’re not venomous, they generally don’t bite people, and they can become quite docile.  Even I’m willing to handle these, and I’m a total wimp when it comes to picking up arachnids!  Vinegaroons are fascinating animals.  Those big, thick projections off the front end are mouthparts called pedipalps, powerful pincers used to capture prey (arthropods and some small vertebrates).  Notice that the vinegaroon in the photo is standing on only 6 legs instead of 8.  That’s because the front legs have been modified into sensory structures similar to insect antennae!  The tail in the back allows the vinegaroon to protect itself from predators, though it isn’t a stinger.   Instead, vinegaroons have glands near the end of the abdomen that store a mixture of acids, including acetic acid (the acid that gives vinegar its distinctive smell and taste – hence vinegaroon!).  When disturbed, the vinegaroon points its tail at the predator and ejects some acid from the glands.  The acid travels up the tail and sprays the predator in the face.  As you might imagine, getting a face full of acid spray will slow most animals down, giving the vinegaroon time to run away.  Now tell me that’s not the coolest thing you’ve ever heard!

Although many (maybe most) Arizonans are scared of all of the animals included in this post whether they’re harmful or not, I think the scorpion is probably the most feared of them all.  We’ve got three common species of scorpions where I live, and all of them have painful stings.  The bark scorpion can actually be life threatening under the right conditions, so it’s good to give these animals a lot of respect.  Still, what a magnificent animal!  Just looking at a scorpion should help you appreciate how very long these beasts have roamed the earth.  There’s something incredibly primitive about them, yet look at the scorpion in the photo.  Isn’t it stunning?  With the morning light shining through its tail it’s almost pretty!  My students found this little one half-frozen under a rock on a very cold morning after a frigid night of camping.  We were enthralled by it and I’m glad I captured it in a photo so I will always remember how glorious this one was.

Even though I am scared to death of the centipedes and you really do have to look out for the scorpions to avoid getting stung, I love living in a place that has so many interesting animals!  The fact that I’ve seen all of these live in the desert on several occasions makes me really happy and I think it’s a real treat to come across a vinegaroon or a solifugid while collecting insects or simply enjoying being outside.  Isn’t nature spectacular?!