Well, my plan to get the less common migratory dragonfly species up last week failed miserably.  I was going to try to get it done before I went on my little Labor Day mini-vacation.  After working 16 hour days for two weeks before I left, I realized that wasn’t going to happen.  ”No problem!” I thought.  ”I’ll bring my materials with me so I can do the post while I’m on vacation!”  Then I forgot to bring most of the things I needed to do the post.  Basically, the plan was doomed from the start!  So, I’m finally back home and once again have everything I need to get the post done.  Sorry for the delay!

The dragonflies depicted and described here are migratory species, but they’re less commonly observed migrating than the ones included in the common migratory species list.  You’ll see these species in swarms, either static or migratory, but you’d want to look here after you look at the pictures of the common species.  They’ll make up a smaller part of the swarm or will not swarm with the same regularity that the common species exhibit.  Still, I thought this would be a useful resource for people who wish to identify the dragonflies they see swarming in or over their yards.

Like last time, let’s start with the big dragonflies, the darners in the dragonfly family Aeshnidae.  This gorgeous animal is the lance-tipped darner (Aeshna constricta):

I think the mosaic darners from the genus Aeshna are some of the most beautiful dragonflies and this one is no exception!   Things to look for: Large, 2.8 inches long.  Males with brown thorax with blue stripes on the side.  No stripes on face of male.  Front-most stripe on side of thorax green on half closest to legs, blue on half closest to wings in males.  Bright blue markings on abdomen in mature males.  Females have all markings either blue, bright green, or yellow depending on form.  Females may have orange-brown wing tinting on the half closest to the body, especially in yellow form.  Lance-tipped darners are found in the northern half of the United States and in southern Canada.  You can tell them apart from other migratory mosaic darners in their range based on the lack of stripes on the face and the wedge shaped cerci (those dangly bits hanging off the back).

The other less common migratory darner is this one: 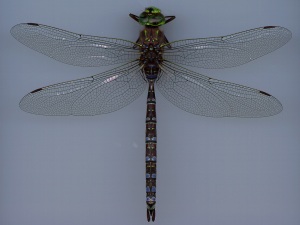 This is the lake darner, or Aeshna eremita. This species looks very similar to the other mosaic darners (including the lance-tipped darner above), but it’s the biggest one in the US and Canada.  Things to look for: Large, 3.1  inches long.  Both sexes with brown thorax.  Stripes on side of thorax blue above and green below with a conspicuous notch in the center (this is very easy to see in the image of the side of the dragonfly at left).  Found in northern United States and southern Canada, with a narrow finger extending southward to Utah and Colorado in the west.  You can tell them apart from other migratory mosaic darners in their range based on the size and the big notch in the stripes on the side of the thorax.

Distinguishing the mosaic darners without catching them can be difficult, even for people who know them well!  If in doubt, try to get a good photo of the top and side of the dragonfly (like the one above) or get as good a look at the color patterns on the abdomen and the thorax as you can.  I’ll tell you where you can send photos or look for good identification information to ID your dragonflies in future post (coming soon!).

The skimmers (family Libellulidae) are much easier to tell apart, especially the migratory species!  This one is very easy: 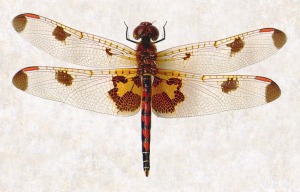 Celithemis elisa female. Photo by Steve Scott and from http://bugguide.net/node/view/60577.

This is the calico pennant (Celithemis elisa), one member of a genus of highly recognizable, medium sized dragonflies.  Things to look for: 1.8 inches long.  All individuals begin their adult lives with the yellow markings in the image of the female, but markings become red as males age.  Pattern and coloration of the wings are specific to this single species – if you see this pattern of wing spots, it’s this species.  You’ll find this species across the eastern half of the United States and a very small section of extreme southeast Canada.

Next up we have a dragonfly with a very limited distribution: 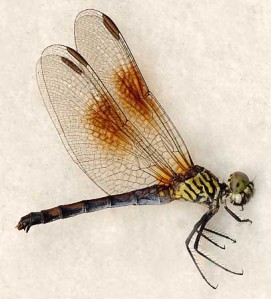 Meet the seaside dragonlet (Erythrodiplax berenice)!  I’ve had a chance to see this beautiful dragonfly on a trip to visit my sister the Park Ranger and it’s a stunner, especially the females.  Things to look for: Small dragonfly, only 1.3 inches.  Slender bodies.  Males start out with some yellow markings on the top of the abdomen, but these fade to black with age.  No coloration on the male wings.  Females similar shape with yellow markings on top of abdomen.  One female form with the black thorax seen in the males, the other (as seen at left, the spotted form) with a series of black and yellow stripes along the thorax.  Spotted female with brown spots on wings.  Found along the eastern and Gulf coasts and along southwestern lakes with high salt contents.

Now for the king skimmers from the genus Libellula.  The first one is the bar-winged skimmer (Libellula axilena): 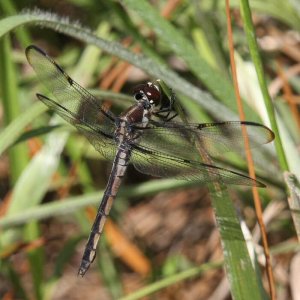 Things to look for: medium-sized dragonfly, 2.2 inches long.  Brown thorax and abdomen.  Abdomen with a thick black stripe down the center top.  Males may appear white in some areas as they mature due to prunescence.  Black markings across the upper surface of all four wings.  This pattern is sometimes seen in the slaty skimmer (Libellula incesta), which is found in the same areas and is about the same size.  Distinguish the males by looking at the face: slaty skimmers have a brown face while the bar-winged skimmer has a black face.  Also, the slaty skimmer is not known to be migratory.  Found through the deep south and in the states along the Atlantic coast.

The next king skimmer is this one:

This is the four-spotted skimmer or Libellula quadrimaculata.  Things to look for: medium dragonfly, 1.7 inches long.  Wings with black spots along top margin of wings, halfway between base and tip.  Hindwing with a black triangular spot at the base of the wing.  Abdomen brown near thorax and darkening to black near the posterior end, yellow stripes along side.  Both sexes similar.  Common in the northern half of the US, the Four Corners states, and most of Canada.

And the last king skimmer: 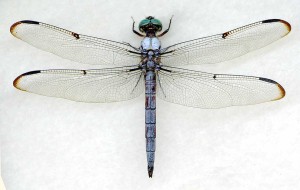 This is the great blue skimmer or Libellula vibrans.  Note the similarity of the female to the bar-winged skimmer, with which it shares part of its range.  Things to look for: medium-large dragonfly, 2.2 inches long.  Dark black spot along upper margins of wings, halfway between base and tip, and a black streak at the base of each wing.  Tips of wings amber.    Male body pale blue-white with blue eyes.  Females brown with a black stripe down the center of the abdomen, blue eyes.  Distinguish from bar-winged skimmers based on wing coloration patterns and the color of the eyes.  Range throughout southeastern US.

And we’ll finish up with three of the small dragonflies: 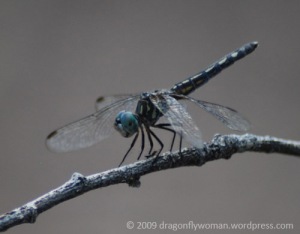 This is the blue dasher, also known as Pachydiplax longipennis.  Things to look for: Small to medium body, 1-1.7 inches long.  Males pale blue-white, sometimes with black and yellow striped thorax, and bright green eyes.  Females black with yellow markings on body.  May have some coloration on the wings, light brown or amber in color.  Found throughout most of the US except the northernmost states of the west-central section.  The blue dasher is a very common species in much of its range and is often seen at small ponds, such as those found in yards and small parks.

And last but not least, two meadowhawks!  This one is very common:

The variegated meadowhawk or Sympetrum corruptum. This is likely the dragonfly you’re seeing if you see a migratory swarm west of the Mississippi River.  Things to look for: Smallish sized dragonfly, 1.5 inches long.  Body mostly grey with a red stripe down the center of the abdomen.  Red markings wrap around the abdomen as well, demarcating the boundaries of the abdomen’s subsegments.  Abdomen also has a series of small, white spots along the lower edge of the side.  These spots are more prominent in the females than the males.  Females replace the red markings with yellow on the abdomen.  Both sexes may look tan as they fly.  Found throughout the western half of the US and southwestern Canada.

Sympetrum rubicundulum male. Photo by Stephen Cresswell and from http://www.insectsofwestvirginia.net/d/sympetrum-rubicundulum.html.

This species unfortunately looks nearly identical to another meadowhawk (the cherry meadowhawk, Sympetrum internum) and shares its range with it, but this species is a known migratory species and the cherry is not.  Things to look for: Small dragonfly, 1.3 inches long.  Abdomen red with black markings on sides.  Wings veins dark (they’re orange in the cherry meadowhawk).  Face yellow or brown (red in cherry meadowhawk).  Abdomen rather bulbous where it meets the thorax, narrows through the center, and expands again toward the back.  Found throughout the northeastern quarter of the US and parts of southern Canada.

And that’s it for the migratory dragonfly species!  Between the common and the less common species, y0u’ll likely find the majority of the dragonflies you might see in swarms in your area.  Next time, I’ll go over what’s known about static dragonfly swarms (feeding swarms) and then I’ll make some suggestions for where to go for dragonfly identification information.  Until next time!