As humans, we take the care of children for granted.  If you have a kid, you take care of it until it is old enough to move out and live on its own.  Lots of other mammals care for their children in similar ways, teaching their offspring how to survive in the world without their parents.  But this sort of parental care behavior is very rare in insects.  The insects I study, the giant water bugs, have a very special form of parental care and I’ll talk about that in my next post.  Today, I want to go over some of the different insects that use parental care so that you might learn a bit about the different ways that insects can care for their young.

This is a carrion beetle (also known as a burying beetle): 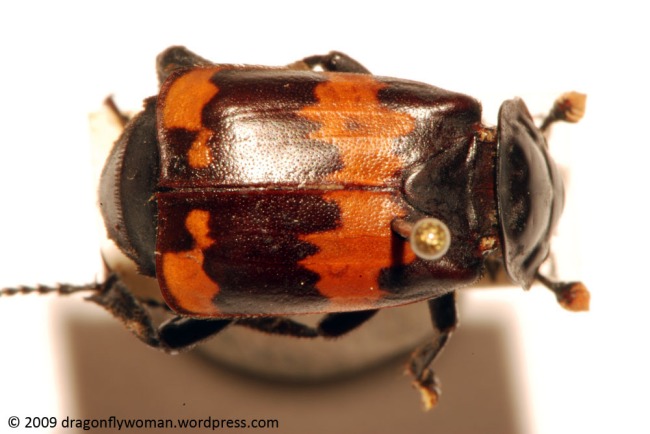 If you follow my blog, I’ve talked about this beetle before in my post about my mold problem in my insect collection, so it should be familiar.  Carrion beetles are some of the more disgusting animals in the world, at least as far as most people are concerned, so please skip on to the next photo if you have a weak stomach.

So how exactly do carrion beetles care for their young?  Let’s go through the process, keeping in mind that it works a little differently from species to species.   First, the male-female pair finds a dead animal.  This could be a mouse, a snake, a bird, a small opossum – anything that’s in the size range a pair of beetles can handle.  Let’s say the beetle above has found a mouse.  The beetle and its mate will pull all of the fur off, roll the mouse into a ball (often colorfully called “mouse balls” in entomological circles), and bury it to prepare the carrion.  The pair will mate and then the female will lay her eggs near or on the carrion.  When the eggs hatch, the larvae will feed on the rotting carcass and the parents often help them feed.  The parents also help make the carrion last longer by eating fly larvae (maggots) that compete with their young for food.  Some carrion beetles spit digestive enzymes on the carrion to keep it fresher longer and others will carry mites that provide this service for them.  In fact, the parents are so busy taking care of the carrion that it requires both of them to keep molds, maggots, and other organisms from completely taking it over and depriving their children of food.  If the parents are successful, the larvae will feed for several days to a few weeks and go through all of their larval instars, then drop off the carcass to pupate.  At this time, the parents abandon the nest and leave their offspring to fend for themselves.  So, carrion beetles care for their young from the egg stage until pupation.  They are also among the very few insect species that have this sort of bi-parental (two parent) care. It is very unusual for both the father and the mother to care for the young.

A more common parental care behavior is the sort you find in the webspinners.  This lovely creature is a webspinner:

Isn’t he gorgeous?  These are actually rather unusual insects that aren’t common most non-tropical (i.e. temperate) locations.  Many entomologists will actually never see one of these alive in their lives!  Luckily for me, Arizona just happens to be one of the places where they are very common, so I was able to get some photos of this webspinner on my back porch one afternoon.

Take a look at the forelegs and look at the tarsi, those little segments near the end of the leg.  See that one big oval shaped tarsus where the arrow is pointing?  This is a specialized tarsal segment.  Were you curious why these are called webspinners?  If so, here’s the reason: that specialized tarsal segment contains a silk gland.  Webspinners are actually able to make webs!  They don’t make webs like most spiders though.  They make long, tube-like webs, called galleries, underground or in a food source.  The galleries are where the parental care takes place.  A male and female webspinner mate in a female’s gallery.  The male leaves right away and the female lays her eggs in her gallery.  As the nymphs hatch, they live within the gallery of their mother under her care.  When they reach the adult stage, they may leave the nest to find another place to live (especially if they are males – they don’t stick around in their mother’s nest very long) or continue to live in the gallery, expanding it so that it fits more and more individuals.  This sort of parental care should sound very familiar, even if you know very little about insects.  If it’s not coming to you right away, I’ll give you a hint: ever see an ant farm?  Webspinner galleries are a lot like ant nests and the sort of care that they exhibit is very ant-like.  One female establishes a nest that can end up containing several generations of offspring.  Paternal care by a single adult female is relatively common among insects, especially in the social insects like ants, bees, and wasps.  But webspinners are rather different from the ants, bees, and wasps too – they don’t have one single female who produces all of the offspring in the nest.  The female who establishes the gallery originally produces a second generation and might produce several more, but the other females in the nest are all able to produce their own offspring as well.  So, to recap, webspinners use maternal parental care (the female parent cares for the young) and care for their offspring from the egg stage through adulthood, and even sometimes beyond!  This is very different than what we saw in the carrion beetles where both parents were necessary for the survival of the offspring and care ended as soon as the larvae pupated.

Now we’ve come to the really rare parental care behavior: paternal care, or care only by the father.  This sort of behavior is only known in a VERY few insects, including the golden egg bug (Phyllomorpha laciniata) and the giant water bugs.  I’m going to talk about the giant water bugs in more detail in my next post, so for now, check out the photo of the golden egg bug at this link:

(I apologize for not having my own photo, but these are only found in Europe and I’ve never been there.  I’m also not keen on stealing other peoples’ photos without permission.)  Did you see the gold colored eggs on the back of the male in the photo?  These bugs are, like SO many other insects, named after a characteristic they possess.  These bugs have bright gold eggs, so they’re called golden egg bugs.  So how do they care for their offspring?  This species is probably just evolving their paternal care, so it’s still a bit sloppy compared to the elegant system you find in the giant water bugs, but here’s the general idea of how the system is thought to work.  The eggs of these bugs have traditionally been laid on plants near the ground.  However, the vast majority of the eggs left by themselves are eaten by ants.  The females of this species are therefore starting to deposit their eggs on the back of other members of their own species, mostly the males, gluing them to the backs of these individuals so that they are protected from the ants until they hatch.  The bugs themselves don’t like having ants on them, so they’re inclined to keep the ants away from the eggs they carry as well.  Pretty neat huh?  The offspring thus benefit from the selfishness of the adult that carries them.  I call this a sloppy system because females basically have to ambush a mating pair to be able to lay eggs on their backs.  Most golden egg bugs really don’t want to carry the eggs and will try to get away.  Mating pairs have more important things going on and keep doing what they’re doing while another female lays her eggs on the male.  The male bugs then carry the eggs around with them until they hatch, at which point the egg shells fall off.  Golden egg bugs thus care for young only in the egg stage and then the nymphs are on their own.  Unlike the carrion beetles, only one sex usually cares for the eggs, and unlike the webspinners, the males are usually the caregivers.  In the giant water bugs, the other insects that use paternal parental care, the system is a little different.  The male and female mate, and then the female lays her eggs in a way that ensures that the male cares for his own offspring.  The females mate, lay their eggs, and leave.  The male is left on his own to care for the eggs until the nymphs hatch from them.